‘Batting average? You are thinking about surviving.’ 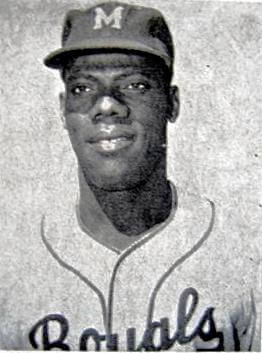 Though he may appear simply to be an unassuming retiree and family man in Springfield Gardens, longtime resident Jonathan “Clyde” Parris also turns out to be one of the last living links to baseball’s Negro Leagues.

Born in 1922 in Panama’s Canal Zone, Parris made his debut in the Negro Leagues during the 1946 season as an infielder with the Baltimore Elite Giants of Negro National League, but was released abruptly to make room for future Hall of Fame shortstop Willie Wells.

He quickly signed on with the New York Black Yankees, where he would have the opportunity to play in baseball’s cathedral, Yankee Stadium. It was here where he would encounter the ageless Satchel Paige.

Parris clouted a home run off of the famed hurler, though not without controversy.

“We were facing Satchel Paige in Yankee Stadium” Parris recalled. “They had him pitch there because he brought in huge crowds. It was near the end of the game when I hit one to right field. The right fielder in Yankee Stadium went to field the ball near the fence and it hit off of him to go over the fence. They started arguing about it. The umpire said it didn’t make a difference; it was a home run.”

His rookie season in the Negro Leagues was the last for the legendary catcher Josh Gibson. Parris described his brush with one of baseball’s immortal figures. “When I played against Josh Gibson, he couldn’t even stoop down to catch — he stooped down about halfway. Yet every time we played against him, he hit a home run or two.”

As did most who played in the Negro Leagues, Parris faced the harsh realities of playing baseball while battling segregation. One incident in particular during a long bus trip awakened him to the laws of Jim Crow.

“I remember one time the bus ran out of gas at a filling station and I was the only one to get out to stretch my legs,” he said. “I got out and told the guy pumping the gas, ‘When you get through pumping the gas, bring me a Coca-Cola.’ The guy kept looking at me and wouldn’t say a word. I thought he didn’t hear me, so I spoke louder. That’s when one of my teammates hollered at me, ‘Come back in here before they kick your butt!’ I then realized I better get myself back on the bus.”

The demands of playing in the Negro Leagues were often exhausting.

“We played every day,” Parris said. “I remember playing five games in two days. What batting average are you thinking about? You are thinking about surviving. The owner is looking at the games.”

Players routinely sacrificed their health to keep the bottom line in order, he said. “We would play a double header in Newark in the morning; play two at Yankee Stadium in the afternoon, and then one in Cedarhurst in Long Island. After the game I was too tired to eat. I went home and fell asleep!”

The Negro Leagues experienced a sharp decline after the Brooklyn Dodgers signed Jackie Robinson in 1945, with many stars leaving for the prospects of the major leagues. Like Robinson, Parris followed suit into Branch Rickey’s organization, signing with the Dodgers in 1952 after playing with St. Jean of the Canadian Provincial League.

Parris sped through their minor league system, earning MVP honors with Class-A Elmira in 1954, beating out future Yankee World Series hero Bobby Richardson for the title. His fine play earned him a promotion to Triple-A Montreal in 1955, inching him closer the big leagues. Parris became an All-Star third baseman in the International League, leading the league in hitting in 1956, battering the circuit’s hurlers to the tune of a .321 average.

After he won the Triple-A batting crown, The New York Times speculated that Parris was ready to be summoned to Ebbets Field. His Montreal teammates who would later make the major leagues felt Parris belonged there.

Jim Gentile, an ex-Brooklyn Dodger who would lead the American League in RBIs during the 1961 season with the Baltimore Orioles, gave high marks for Parris. “He was an outstanding player. He could really swing the bat. He should have been in the big leagues.”

Billy Harris, another former Dodger, echoed Gentile’s sentiments. “That guy would have been a superstar in the big leagues. He was a great third baseman. He could hit to all fields. He had everything going for him … it’s just too bad he didn’t have a chance.”

Parris reflected on the prospects of getting his major-league promotion — known then as “a cup of coffee” — with the Dodgers. “After leading the league in hitting, a lot of people thought I was going to be called up. [Many] people told me I could replace Billy Cox, but I couldn’t do that.” Cox was the Dodgers’ well-regarded third baseman in the 1950s.

Even after the league’s integration, Parris saw his race, as well as his age, working against him. “They never told me about a [racial] quota, but I saw they weren’t going to move Billy Cox to bring in someone my age,” he said. “I felt I could out-hit him. They said he was a great fielder, but I was a great fielder, too. Deep down inside, I didn’t expect to go to the big leagues because of my age. I was 34. They weren’t going to take a chance on an older black rookie.”

Affectionately known as “The Dude,” Parris would continue playing in the minor leagues until 1960. His teammates included multiple Hall of Famers, such as Sparky Anderson, Don Drysdale, Tommy Lasorda and Dick Williams. He still owns the record for the highest single-season batting average in the Panama Winter League, batting .434 in the 1959-60 season, and holds most of their career batting records as well.

After retiring from baseball, he moved to his current home in Queens during the mid-1960s, raising three children there with his wife Eugenia. He worked as a clerk for the city Department of Sanitation and the Metropolitan Transportation Authority until his retirement in 1988.

His baseball career had remained a quiet secret until recently, when the Topps Co. honored Parris with an official baseball card in its 2009 Allen and Ginter set.

“I felt honored for Topps to give me a baseball card. I thought they could have used a better photo, but it is nice to see one after all of these years,” said a smiling Parris. “I had a good run in baseball, I can’t complain.”