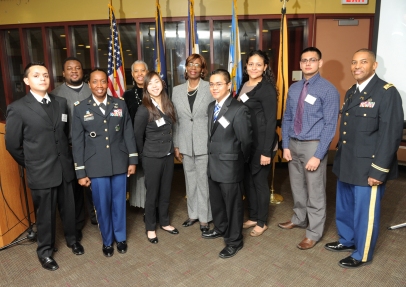 New cadets are being trained for a future serving the country right at York College, in the first city ROTC program in decades.

“I’ve wanted to be an officer all my life,” said junior Jerome Tabaosares. “I wanted to go to school close to home, and as soon as I found out [York] offered ROTC, I jumped right in.”

York’s ROTC program is the first offered at any CUNY college since 1960, and includes a three-credit course comprised of Military Science 101, 102 and 202, as well as Military Custom and Courtesies, Army Ethos and more. An appreciation breakfast was held on Wednesday, January 17 in honor of the growing program; the

York cadets, faculty and also Army members were in attendance.

Tabaosares, a first generation New York native, comes from a long line of Filipino marines and knew that he wanted to follow in the footsteps of those before him. A nursing major, he intends on taking his ROTC experience and continuing on to the Nursing Corp of the Army, hopefully as a Nursing General.

“This is the absolute best leadership training in the nation,” she said. “Today’s service members are part of a unique team, working together for a single purpose.”

During what Mathis called “one of the most turbulent times in our nation’s history,” she said it was young cadets like those at York that will continue to ensure the safety of our country.

“ROTC is about developing strong leadership skills for life,” said Marcia Keizs, president of York College. “With this preparation, our participating students are enhancing their abilities as leaders.”