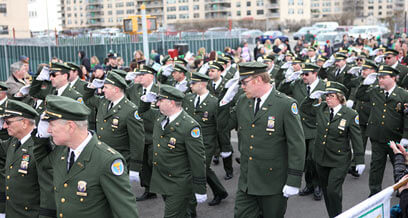 The streets of Rockaway Park were cleared for the weekend’s St. Patrick’s Day parade, and everyone knew who to thank.

“If it wasn’t for Sanitation, we’d be done,” said Mike Kehoe, a 47-year resident whose home is just a block away from the parade route.

Kehoe said that in the days and weeks following Superstorm Sandy, it was the city’s sanitation workers and volunteers who helped return life to normalcy.

“The volunteers, the outpouring of help … it was heartwarming,” he said.

The parade route — which traveled along Newport Avenue, down the business section of Beach 116th Street and then along Rockaway Beach Boulevard — showed signs of the storm and the recovery.

A sign outside the Rockaway Park subway station said service would be discontinued until further notice, some lots lay empty where buildings had burned down and a number of businesses were still displaced, but life was returning.

The Paninico Cafe had reopened its doors just the day before the parade, and owner Mike Adil said it was important to be back.

“I think it’s good to show people we’re here,” he said, “to show our solidarity and support.”

As snow flurries fell outside, Adil said he had just what people needed to warm themselves up.

“Of course, corned beef and cabbage,” he said, adding the cracked wheat chicken soup was pretty good, too.

But Mayor Michael Bloomberg did not receive such a warm reception.

Up and down the route, parade-goers booed the mayor and held up signs.

“You see our town? What has he done?” asked Charlie Ciliberti. “All he cares about is Manhattan, but we really suffered down here.”

Bloomberg said all of the city’s uniformed services really stepped up to the plate, but it was Sanitation’s day.

“I don’t think there’s anyone who could have done the job you did as quickly, efficiently and safely,” he said. “We all want to say thank you for what you’ve done.”

“It feels wonderful, really good,” he said. “We were out here working 12-, 14-hour days for three months cleaning up, getting people’s lives back together.”

Kirchein said the parade was a good celebration for the neighborhood, and he was looking forward to seeing the beaches open up in the summer.

“There’s still more to do to get things back to normal,” he said.

“This is a great day for the Irish,” Sanitation Commissioner John Doherty said, “and a real fine day for Sanitation.”