Looking out every window in her life, Diane Sipprelle finds life, beauty and inspiration.

Born in Knoxville, Tennesse, the young southern artist made her way to the big apple in the early 1980s to chase her dreams of being an artist. After a few years of traveling, Sipprelle made her way into Long Island City where she was able to move into a “large, airy” apartment.

Once her surroundings blocked her views of the world around her, she moved looking for a larger space and views to Dobbs Ferry where she now overlooks the Hudson River.

“It’s important for me to have something I find interesting to paint from these windows. “ she said. “It’s like living in the painting.” 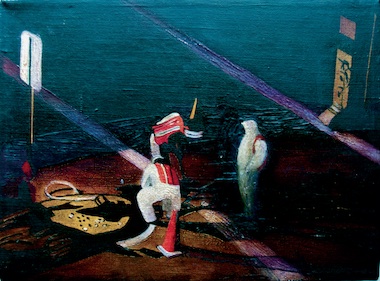 Working a day job, she finds it easier to be able to paint from her windows before and after work. During her time in Long Island City, her inspirations would come from the industrial landscape that surrounded her every day.

“I had such wonderful views of the 7 train which ran within a couple of arms lengths from my windows.” she said. “It was hilariously noisy but this was a perfect painting situation for me.”

Beginning her process of bringing the painting to life, she would take photos of the scenes that caught her eye, trace it onto a canvas, lay in the outlines and then color in like a coloring book.

“I particulary like oil paintings because you can change your mind, add and subtract layers as you feel more acquainted with your home view,” she said. One of the works that can describe her best views from her Long Island City apartment is called “LIC Train Workers” and can now be found at the Diego Salazar Gallery. This oil painting, created straight out of her pajamas, details the hard work of train workers under a nice blue sky surrounded by the industrial city.

She recalls a specific mentor in her life in the early 1960s, who had a studio right off her kitchen. While the mentor would be cooking dinner for the present dinner party, she would also go about checking her painting in the studio.

“My first memories are of art and I always felt most in my element when I was with artists,” she said.

Among her inspirations are women who were considered to be eccentric and kept true to themselves in life and in their art works. Some of her influences include, Emily Carr, Alice Neel, Georgia O’Keef, Marjorie Portnow and many more.

“I’m a slow thinker and I mull things over and like to push things too far and then I can reconsider and rub that off and repaint. Push and pull.”