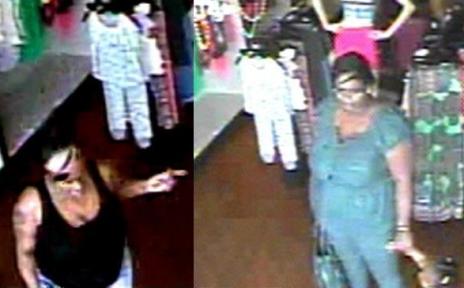 Police have arrested two women in a series of Bayside store thefts where they allegedly used a four-year-old girl to steal cash and credit cards.

Shannie Eastman, 39, of Queens, and Tisha Strong, 41, of Brooklyn, have each been charged with grand larceny, petit larceny, and failure to exercise control of a minor, cops said.

Two of the thefts occurred within less than two hours of each other on May 7. That afternoon, the suspects had the child, who is Eastman’s daughter, take a wallet containing $200 from a salesperson at Karma Boutique at 38-27 Bell Blvd., according to police and the store’s owner.

Around 2 p.m. while the store was busy and the salesperson was distracted, one woman told the young girl to take the wallet, which was behind the cash register.

The child then allegedly gave the wallet, which also contained personal identification and a debit card, to one of the women who placed it in her pants and fled the clothing store.

The women are accused of committing a similar theft at a nearby thrift shop called The Worthy Pause, on Corporal Kennedy Street, about 3:30 p.m. the same day, according to police.

They entered the store with a young child and took two purses, which contained approximately $170 and several credit cards before fleeing, officials said. The stolen goods belonged to two store volunteers, according to another volunteer who works at The Worthy Pause.

Police said the same women are also connected to an April 10 theft at the Empress Travel Agency, located at 39-22 Bell Blvd.

Two women came into the business with a young child around 3 p.m., then stole $900 from a cash box, which was located in a back room near a bathroom that the suspects asked to use, cops said.