Fifty-seven families came together to file a lawsuit against the landlord of their Corona apartment building over hazardous conditions from rodent and roach infestation to crumbling ceilings.

The tenants of 96-10 37th Ave., a rent-stabilized building of about 76 units, filed a lawsuit Tuesday against Benedict Realty Group LLC (BRG) demanding the landlord repair the conditions they face in their apartments.

In the lawsuit, tenants claim that BRG has not been addressing their concerns with repairs and building safety, and that they have dealt with issues such as untreated rat and cockroach infestations, no or inadequate heat and water, ceiling leaks and cracks in walls and floors, mold and exposed electric lines.

“To get repairs has become a privilege for tenants instead of a basic service or basic right,” Tejeda said. “They pay the rent every month in order to get those basic services. They’re begging for their services.” 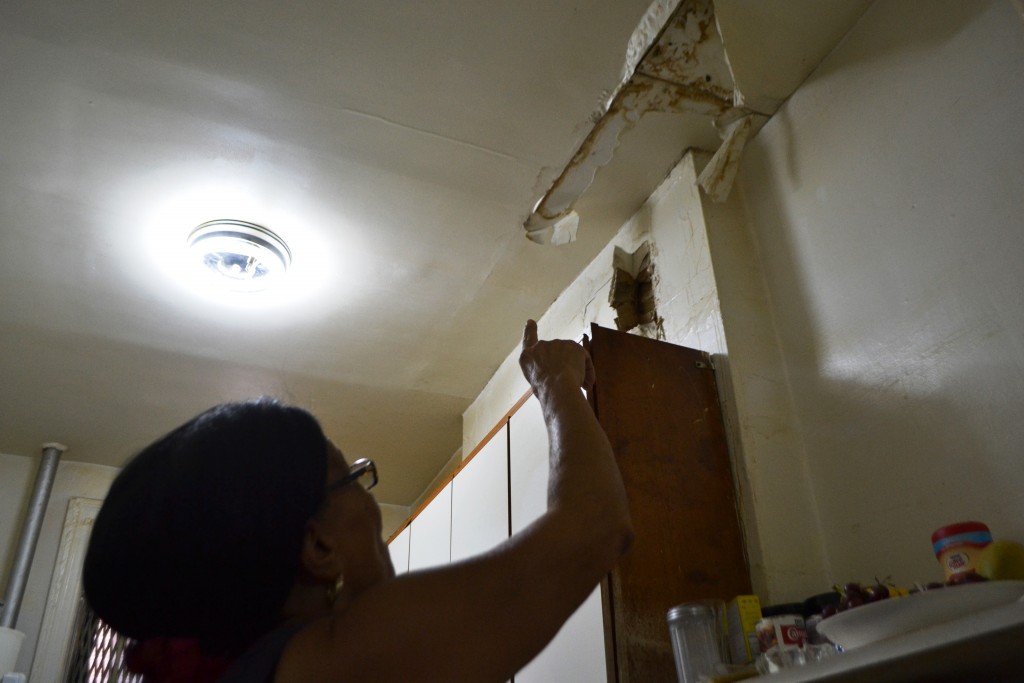 According to attorney Keriann Pauls of the Community Development Project of the Urban Justice Center, who has filed the lawsuit on behalf of the tenants, the landlords have done patchwork repairs but none of them have been done appropriately.

Along with having filed the lawsuit, the housing court will also have to schedule inspections with the city’s Housing Preservation Department before the tenants appear in court.

Currently, there are over 100 violations – including water leaks, structural issues, problems in the electrical system and general deterioration – open for 96-10 37th Ave., with some violations dating back to 1993.

According to Pauls, the open violations either mean the landlord addressed the issues and didn’t file the right documents or the violations still exist.

“It’s a situation where we said enough is enough and they don’t hear us individually, they hide behind an answering machine, so this is a time for everyone to get together in a small force,” said Jose Mencia, a tenant at the building for over 50 years.

Mencia added that one of the big issues is that the building no longer has a live-in superintendent. He added that their current super puts up signs saying that he is only available from 9 to 5 on weekdays but not on weekends, and doesn’t provide help when tenants ask for it.

“They would just like for us to get the hell out of here and just re-rent the apartments,” Mencia said. “BRG is a management company that manages a lot of apartments and behind them are investors. To them it’s an investment. They don’t care about the people. “

Enriqueta Vicioso, who has been living at the site for 15 years, calls the conditions she lives in “fatal” as she is afraid to shower in her bathroom because there is a gaping hole in the ceiling where pieces of sheetrock have fallen from.

Vicioso said in order to take a shower she has to step outside and pour buckets of water on her head.

She also added that the ceiling in her living room and kitchen also have open holes in them.

A group of the tenants got together on Wednesday in front of 96-10 37th Ave. to announce the lawsuit and rally against the conditions.

Tenants held signs that read, “We pay rent we deserve a better living condition,” and “We demand legal representation in housing court.”

“I want to live like people, not like animals in the mountains,” said Jose Gutierrez, a tenant in the building since 1979 and who has issues with mold in the walls among other problems. “We’re all here with a purpose. United we can [do this].”


According to a BRG representative, the company is surprised to hear about the lawsuit and has spent more than $600,000 in capital expenditures on the building in the past 18 months. These funds went toward upgrading electrical systems and installing new elevators, new front doors, and a new compactor and chute. There are also ongoing capital expenditures to replace mailboxes and the intercom system at the site.

“We are very surprised to hear that tenants are planning a lawsuit against 96-10 37th Avenue,” said Daniel Benedict of BRG. “We have never been the subject of a tenant lawsuit of this nature and take pride in our relations with our tenants as well as the way in which we maintain our buildings.”

Benedict added that the company also has an online work order submission system and they have received no formal complaints in relation to the issues addressed by tenants.

The superintendent also had reported to BRG a few months ago that there were signs of a rat in the basement of the building and BRG immediately increased exterminator services to the building and the issue has been addressed since then, according to Benedict.

After being contacted by The Courier, BRG looked further into the issues and “just became aware” that one tenant had complained to HPD last week about a hole in their apartment in relation to the infestation. A contractor is scheduled to go by the apartment on Thursday to fix the problem.

In response to BRG, attorney Pauls said they are happy if the landlord wants to respond because overall that is what the group is looking for, but according to what the tenants have said their requests have not been answered adequately.

“The tenants have come to us and said they have been asking their landlord through the super through management and any way they can to get repairs,” she said. “Their request for repairs, for services have gone unanswered. It’s an entire group that has banded together. If they had received some sort of solution I’m sure whoever would have passed that information along to their neighbors. When I met with the tenants recently and today you see that their requests haven’t been answered adequately.”