It’s candidates night in Glendale, as residents hear from those seeking their November votes With the Nov. 8 general election rapidly approaching, some of Queens’ incumbents and hopefuls visited the Glendale Property Owners Association (GPOA) at their candidates night version of their monthly meeting last week to make their pitch as to why they should get your vote.

Both candidates involved in one of the three local contests showed up for the session at St. Pancras Pfeifer Hall in Glendale: incumbent state Senator Joseph Addabbo and challenger Michael Conigliaro, who are fighting to represent the 15th State Senate District seat in January.

Addabbo listed a number of things he has been able to accomplish and is continuing to fight for. This included getting rid of the 5 cent plastic bag tax, expanding programs for seniors, funding education and opposing the proposed homeless shelters in Glendale and Maspeth.

Congiliaro, on the other hand, outlined reasons why voters should make a change in November. “One of the biggest things that I’ve noticed here — I’m a resident of Rego Park, I live in the district — is that the quality of life in our area over the last eight years has deteriorated,” he said.

In order to change some of the problems that have been plaguing the neighborhoods, Conigliaro will call upon his persistence to get things done.

The senate hopeful relayed how he helped get unsightly garbage removed from the former Sports Authority parking lot earlier this summer, and how he has marched in Maspeth and Brooklyn against the proposed homeless shelter.

“These are the things that are very important,” Conigliaro said. “The things that I want everyone in this room to realize is that when you go to vote on Nov. 8, I implore you to think long and hard, and say to yourself, is your community better than it was eight years ago?”

Preceding Addabbo and Conigliaro at the meeting was Daniel Maio, a Republican running against incumbent Grace Meng for the 6th Congressional District — which covers neighborhoods from Flushing and Bayside, to Rego Park, Middle Village, Glendale and parts of Ridgewood.

Maio said he has been knocking on the doors of voters within his district to hear directly from them regarding what their biggest concerns are and what they want to see changed. One major concern he found was that residents were having problems with getting their issues fixed, which would be the responsibility of 311.

“That is where Democrats are wasting your money,” Maio said of the city’s 311 system. “If you don’t report it, they don’t care … people who don’t call in are not getting attention.”

Maio feels there is a better way to address the public’s issues; he wants to create a map system and check for existing problems already reported to the 311 system, but also fix problems that have not been reported but may need attention.

“That’s what I’m going to propose locally, not just on the quality-of-life issues, not just on the traffic problems,” Maio said. “We’re also going to do crime problems in this areas so people see the pattern. And that would basically give life and control back to you.” 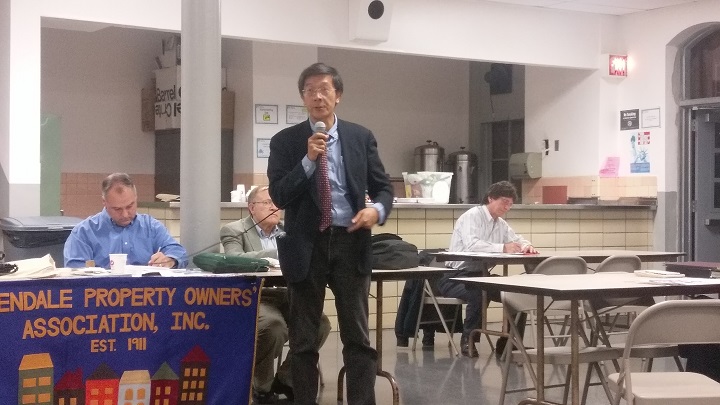 If Maio gets elected, he also plans on introducing a way for citizens to be able to write citations on quality-of-life issues that they may face.

“If people park in front of your driveway, if they throw trash in front of your house — especially if you own property — you can write the citation and the city will try to cooperate because you know what’s happening, you know when it’s happening,” he added. “We need to give you control. We need to give you that authority to do something about it. And that’s what I’m going to do.”

Maio’s opponent, Meng, was not on hand for the meeting.

Assemblyman Mike Miller of the 38th Assembly District, who will face off against Joseph Maldonado, was at the GPOA meeting to remind his constituents of some of the things he has accomplished. Miller has recently helped get the Child Safety Hotline Bill passed, which will require public schools to hang signs to let children know where they can call if they are abused, he worked on increasing veterans services including getting $200,000 to help bury indigent veterans, among others.

Maldonado was not present at the meeting, but GPOA is looking to get him in for another meeting before the election.