See if you can escape the room at Locked in Astoria My teammates and I scurried around the dimly lit dorm room, looking for a clue—any clue. Someone overturned a rug, while another crouched to peek under the bed. But I was the one who happened upon the right hiding place; a key clattered to the ground.

“See if it opens that lock,” I said, tossing the key across the room to one of my friends. It did.

And we were off.

Over the next 60 minutes, my team solved clue after clue to figure out what happened to Spooky Room 479’s fictional occupant, Sarah, who had mysteriously disappeared, and to escape the room before her ghost haunted us forever.

In the process, we cracked codes, used our musical skills, opened combination locks, communed with a ghost, and gamely stuck our hands in an unknown substance, all in the name of getting out of the room before the timer ran out.

And we did—with 5 minutes and 2 seconds to spare, we tumbled out of Spooky Room 479, laughing and cheering.

Escape rooms are growing in popularity, popping up all over the country and around the world, but Locked, at 22-56 31st St., is the first to come to Astoria. It opened in August and offers two challenges: Vendetta and Spooky Room 479.

In the mafia-inspired Vendetta room, your team is part of a mob family trying to break into a secret bank account before midnight, when the $300 million kept in the account will be lost to you forever. It’s open to kids as young as 8 (with adult supervision) and has an escape rate of 38 percent.

One of the owners, Sandra Anagnostos, who was born and raised in Astoria, said that kids actually do better than adults on some of the clues.

“Kids sometimes find the obvious clue, where adults will tend to overthink it,” she said.

“In Vendetta you know what your goal is, while in Spooky Room it’s more of a storyline; you’re trying to figure out what happened to Sarah,” she said. “It’s more of a mystery.”

Spooky Room 479 isn’t scary, per se (OK—I’ll admit that something made me jump), but with the dim lights and bloody handprints on the walls, it is a bit creepy. That, in addition to its increased difficulty level, is why it’s for ages 14 and older. About 25 percent of groups make it out of Spooky Room 479 before the hour’s up, but teams have fun no matter what, Anagnostos said.

“We found that no matter if you get out of the room or you don’t solve it within 60 minutes, the feedback has been tremendous,” she said.

A “gamemaster” introduces teams to the game and is able to give clues through a TV screen mounted on a wall in the room when teams get stuck. If a team doesn’t make it out of the room in the allotted time, the gamemaster will explain what steps they needed to take to escape. 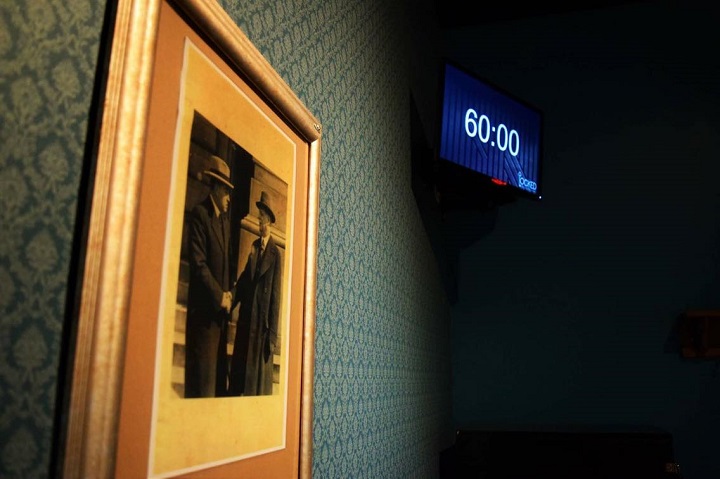 “We’ve had a lot of groups that do one room and then if the second room is available, they’ll do it right away on the same day,” Anagnostos said. “And then as soon as they finish both rooms, they’re like, ‘OK, when are you coming up with new rooms?’”

Locked won’t be changing their rooms for at least a year. First of all, it takes about two to three months to create a room, from coming up with an idea and implementing it to doing beta testing (“It’s a lot of trial and error,” Anagnostos said). While some escape room companies buy pre-made challenges from outside vendors, Locked’s rooms are all original. One of the Locked partners, Vassilis Matsos, has an escape room in Greece, and Spooky Room 479 (which he created) is the most popular room at that location. The Locked team adapted that room for the Astoria location, so you won’t find this challenge anywhere else. Vendetta is a combination of two rooms that Matsos had in Greece, plus some added technological aspects.

Additionally, the rooms won’t be changing for a while because they’re hoping to draw customers from not only western Queens, but also Manhattan, since the area is so accessible by the subway.

“We were originally looking to open in Manhattan, but we found this location and fell in love with it right away,” Anagnostos said. “Astoria is just such a great neighborhood, and the Ditmars area is very vibrant right now. You have great restaurants, coffee shops, some art galleries, and being that our location is literally steps from the N train, we just think that it’s so convenient for people to hop on the train, come do the escape room and then go out to a great restaurant, bar or coffee shop.”

Locked is looking to partner up with a few restaurants in the area to offer birthday packages. The escape room has already had a few birthday parties for kids and teens. Anagnostos said that escape rooms are great team-building activities for corporations or offices, and that it’s also fun for bachelor or bachelorette parties or date night.

“The idea of escape rooms is that you get together with a group of friends and it’s something different to do,” she said. “We also feel that everybody’s so attached to their technology these days, and this is just a different way to have fun.”

One escape room enthusiast who’s done 106 rooms said that Spooky Room 479 was one of the best rooms he’s ever done, Anagnostos said. He later came back so he could do Vendetta, too.

I’ve done nowhere near that many escape rooms—only a couple—but I had the most fun at Locked, where there was a greater variety to the clues, more technological elements, and small team sizes that allow everyone to have a major role in escaping.

“It’s just a little escape from reality,” Anagnostos said. “Our goal is to add a little mystery to everybody’s everyday lives.”

Escape games at Locked are $28 per person, and teams that want to guarantee having the room to themselves should book the whole room.

For more information and for booking, visit escapelocked.com.