You'll get serious apartment envy after looking at this sleek Astoria space with pops of color – QNS.com
Arts & Entertainment I discovered Troy Peppicelli and Dustin Bryant’s apartment while I was scrolling through Instagram one evening. Peppicelli had posted a picture of a sofa that looked almost the same as mine, but with sleek, mid-century legs. I messaged him to ask him about it and he told me that yes, it was indeed my Ikea sofa, but he had upgraded the legs using Etsy. What a great hack! “Just search ‘Ikea upgrades’ and you’ll see all sorts of ideas pop up,” Peppicelli suggested. I went to see his Pinterest-worthy apartment in Astoria, where I discovered a perfectly curated mid-century modern pad. Total “Mad Men” chic! Troy Peppicelli, a house manager at the Roundabout Theatre Company, shares a home with his boyfriend Dustin Bryant, director of individual giving at The New School, along with their two adorable puppies. Moving in with your beloved isn’t always easy; combining tastes can make or break a couple, but Peppicelli and Bryant seem to have compromise down to a fine art. “Dustin loves grays and navies and I love color,” Peppicelli explained. The couple makes this work by using Bryant’s muted tones as the base pallet and adding pops of color in blue and orange in the form of throw cushions and the dining chairs. “The color of the chairs is called Desert Sunrise, in case you’re interested.” Colorful accents can be seen all over their bright Astoria apartment, but always within their color scheme. The lion artwork on the wall has their signature orange in it, and the even the whimsical pompom bunting contains both orange and gray. 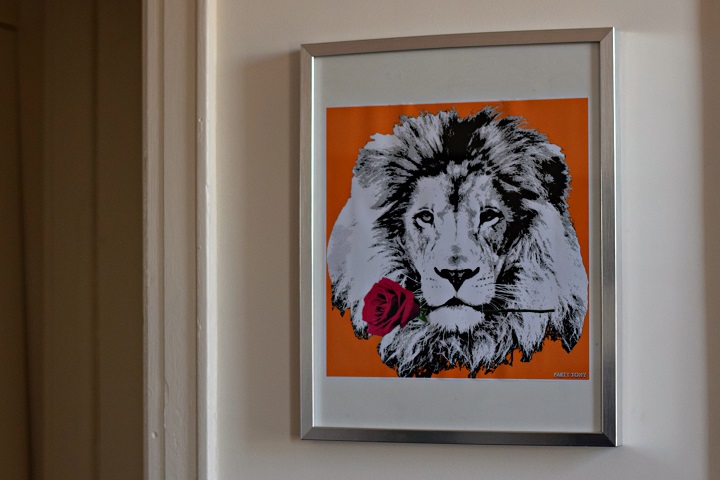 “We can be a bit like ships in the night,” Peppicelli told me. “Dustin works in the day and I work at night. We usually have about 45 minutes of crossover time in the evening when we can catch up about the day. Sundays are the only day when we are both at home and can relax together. Because I only work evenings, I tend to be a bit of a housewife in the days. That’s when I like to decorate. I’m always tweaking things.”

Bryant helps keep the couple’s apartment stylish on a budget.

“Dustin is great with figuring out sales and special offers,” Peppicelli said. “When we knew we needed to furnish our new apartment, he went out and signed up for a West Elm card. There was a crazy sale on, so we purchased all of the bedroom furniture and dining table and chairs for under $3,000. We supplement the rest of the apartment with pieces from Target or Etsy. This lamp is actually a Target purchase.” The apartment seems so clutter-free and spacious for a one-bedroom. “The storage is amazing,” Peppicelli told me. “We each have our own closet. That’s the wonderful thing about Astoria — you really get bang for your buck.” Separate closets — the dream! Everything in this apartment has its place. Most kitchens have the cooking oils out and on hand, but Peppicelli has his displayed on a quirky tray with a sweet mason jar filled with fresh flowers next to them. Everything can be beautiful if presented the right way, it seems. With that in mind, take a look at the pots and pans that are hanging on the wall. Of course, they are all chic slate-gray and look just perfect out on display in the kitchen. “If I’m ever feeling depressed, I just like to make the apartment look really cute. It can have such a positive effect on your mental health,” Peppicelli mused. I can totally see what he means: the apartment felt like a tranquil oasis away from the bustle of Astoria below. I didn’t want to leave, especially when the two dogs came out to play. Mid-century modern, grays and color, lots of compromise and an Ikea sofa that looks like it came from a designer showroom — a true love story all around.