This Long Island City family are prolific artists with 1,000 paintings stored in their home Across the street from Long Island City’s MoMa PS1, a father and daughter duo have been creating their own art for years.

Carlos and Aliyah Seidler have more than 1,000 paintings scattered throughout their two-story house with some of the pieces dating back to the 1980s.

Carlos Seidler, a retired professor, and Aliyah Seidler, a junior at Frank Sinatra School of the Arts, combine their love of drawing and painting to make their masterpieces. While his daughter uses her vivid imagination to sketch out scenes, Carlos Seidler uses his love of color to complete the works.

Carlos Seidler cites Vincent Van Gogh and Leonardo Di Vinci as some of his favorite artists.

“[I admire] Vincent in the technique he uses with colors,” he said. “That’s why I use colors because of him, and Leonardo because of the poetry and sensibility that he shows. Almost like he’s painting life. You can see the souls. Most artists can never achieve that I think. When you look at a painting and you think, ‘It’s alive!’”
Aliyah Seidler said she has been drawing “as soon as [she] started walking.” Her sketches can be found along the walls of the Seidler house, especially in a small storage room where they keep many of their paintings and supplies. Many of her sketches focus on relationships between family and friends. The duo is also working on a series of paintings featuring “matchstick people,” small characters that resemble matchsticks.

“I give her the canvas [and] she draws,” Seidler said. “She gives it to me. I color it. And usually she decides what to draw. Except on a few occasions when I ask her. Bust most of all I love to be surprised by what she comes up with, with her imagination.

Each of them work on their own pieces as well. Carlos Seidler uses an interesting technique to create a series of “stains” that resemble faces. Many of them resemble how people usually describe aliens. The back of a wooden brush is used to create intricate shapes that are used for eyes or mouths.

“But most amazingly I think is the perception,” he said. “There is no face there but the brain sees a face. It’s just stains.” The longtime Long Island City resident said he is inspired by science and different regions in the brain.

“They discovered we have two different sensors in the brain to appreciate beauty and ugliness,” he said. “So I’m always trying to cause a sensation. The brain relishes somehow discovering what’s in the painting more than what is completely obvious. I am always trying to do things which are more suggestive.”

Carlos Seidler said he has learned a lot by working with his daughter and tries to tap into his inner child while painting, especially when it comes to repressing the thought of what other people might think about his creations.

“I learned from her not to be afraid of anything that you want in life because especially when she was younger she would get a pen and paper, draw something and it was amazing and beautiful she didn’t even think about it,” he said. “Children just draw and they are happy and it’s beautiful so this is what I learned from her, which I still haven’t mastered. I am still in the process of becoming free again and it’s not easy sometimes.”

The duo has shown their paintings at the LIC Arts Open but have mostly kept their hundreds of paintings at home. Carlos Seidler said he’s had no desire to sell the paintings, especially the ones by Aliyah Seidler, but is thinking about it since they now have so many. On April 1, a few of their paintings will hang from Into White Dental, a dental office at 47-43 Vernon Blvd. Dentist Steven Mantinaos has been showcasing artwork from local artists in his office for years. After a cleaning, Carlos Seidler gave Mantinaos a painting depicting one of his figures with one tooth and the words “Don’t wait until the last tooth to visit your dentist.”

Mantinaos enjoyed it and now the Seidler’s paintings will hang in his waiting room for one month. Carlos and Seidler expect to be working together for a long time. Though Aliyah Seidler does not want to pursue art as a career, she said she knows she and her father will continue to learn from each other.

“[What I learned from my father is] just determination and creativity,” she said. “Like the use of color because I’ve seen other artists and I’ve never seen so many colors together and each painting, although they look chaotic in a way, if you look in detail they look really organized and neat and I like that about him.” 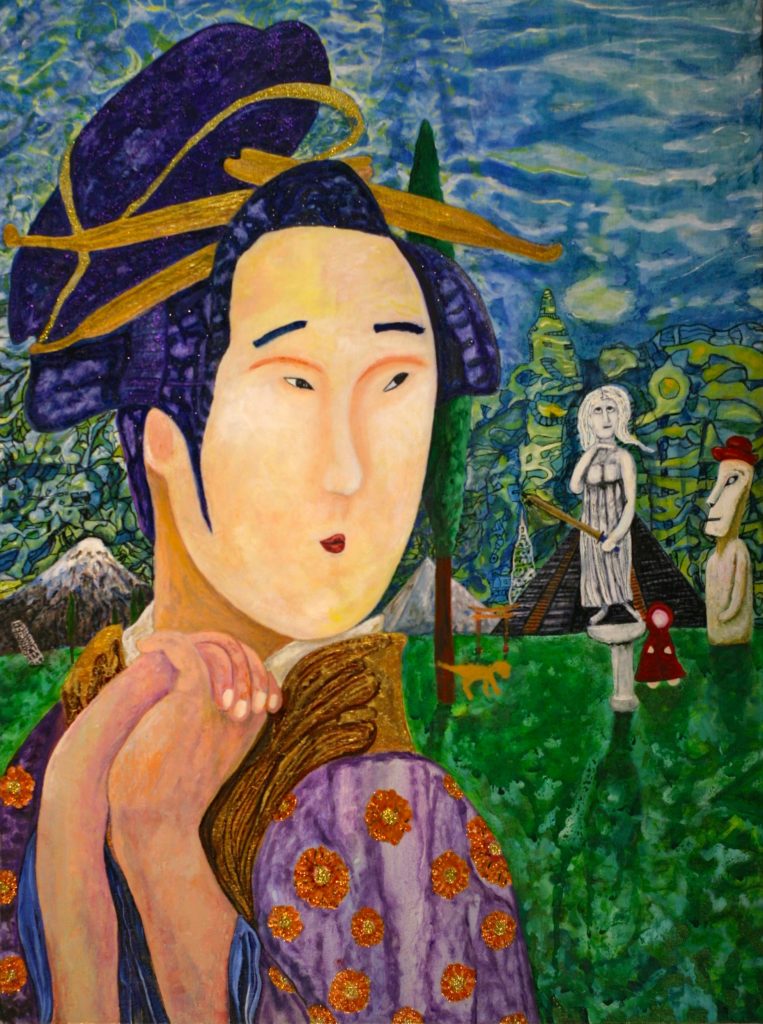