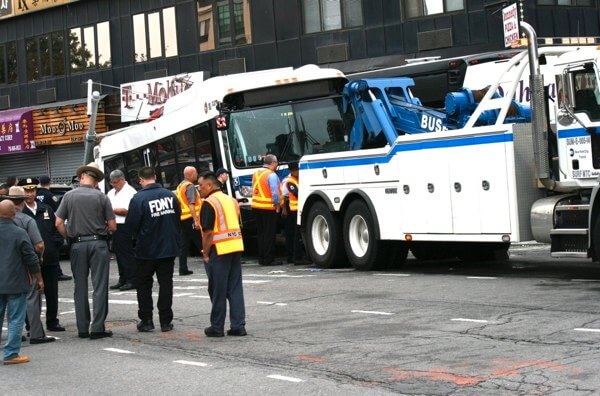 The report examined 249 companies operating in New York state with inspection data and focused on 10 with the worst inspection results, all of which were found to be in the bottom 30 percent of companies, nationwide, for safety records.

According to the IDC, federal studies show a high correlation between unsafe driving behavior and a higher incidence of crashes. Using data from the Federal Motor Carrier Safety Administration, the report found 121 companies with points for unsafe driving violations, 51 of which had received sufficient violations to receive an unsafe percentage value from the agency. The report revealed the 10 worst companies all had an unsafe driving percentage level greater than 70. Dahlia Group, the Flushing company involved in the fatal Queens crash, was the seventh worst on the top 10 list.

According to the study, the worst operator was Sagbus Inc., another Flushing-based company, which received 18 violations over the 24-month period examined despite only having one recorded bus and onedriver. Sagbus violations included two violations for failing to obey traffic control devices and two for speeding, one of which was for exceeding the speed limit by more than 15 miles per hour, according to the study.

The second worst offender, Yep Tours, based in Chinatown, received 212 violations, including 34 for unsafe driving in those 24 months. Violations included five instances of drivers caught speeding more than 15 miles over the limit and one instance of a driver using a hand-held phone while driving, according to the study.

Under the IDC’s legislative proposal, penalties would double if a company failed to disclose the hire of a driver with a DUI conviction.

Raymond Mong, driver of the Dahlia bus involved in the Flushing accident, had been fired from the MTA two years ago after being convicted of DWI while operating a private vehicle. The state DMV was not notified by Dahlia that Mong was driving for them. IDC would triple penalties if a company failed to disclose a hire to the DMV and that driver was subsequently involved in an accident that kills or injures a person.

The IDC’s second proposal would require bus companies to post driving safety records on their website or at the point of sale. IDC wants the companies’ U.S. Department of Transportation identification number, on road performance percentile, summary of safety activities, inspection history and violation summary available to customers before boarding their buses.

In 2012, U.S. Sen. Chuck Schumer (D-NY) passed a law that rated bus companies with satisfactory, conditional and unsatisfactory ratings from the Federal Motor Carrier Safety Administration. Last week, Schumer said he wants to amend the law and require bus operators to post restaurant-style letter grades on their vehicles’ windshields to allow passengers to know the quality of the service before they board.

State Sen. Tony Avella (D-Flushing), a member of the breakway Demcratic group, said any person operating a passenger bus should be held to the highest safety standards possible.

“When people board a bus, they do so assuming that their safety is a priority and that they will get to their destination safely,” Avella said. “Companies that fail to disclose safety information, especially that of a driver who has a history of unsafe driving, are purposely putting their customers, and everyone who they share the road with, in serious danger. Strengthening the penalties for this dereliction of duty is a good start to ensuring the safety of New Yorkers who put their lives in the hands of bus companies.”