When I first met Megan Sipe, she was selling her uniquely flavored chocolate truffles at Astoria Tiny Market, with a red hat sitting at a jaunty angle atop her head and wearing an apron, as if she were ready to whip up another batch of chocolates at any moment.

Like any self-respecting chocolate lover, I was drawn in by the free samples. The distinctive flavor combos of Sipe’s offerings would be enough to merit a write-up on their own, but her business, Chocolate Dances, does much more than just make and sell chocolate. It’s also a dance company that creates interactive performances that include chocolate tastings.

Seriously — what pairing could be better than that? Sipe has always been a dancer and choreographer, but chocolate-making started as a hobby. “I wanted to make a show that incorporated food, and chocolate seemed like the perfect thing to do,” she said. “So I started bringing chocolate to rehearsals, and we would give it to the dancers and we would talk about what does this chocolate taste like, what kind of flavors do we imagine, and how can we create movement from that?” Chocolate may have started as inspiration for the dancers, but luckily for audience members, Sipe decided to create a performance series in which chocolate tastings for the audience were incorporated into the shows. 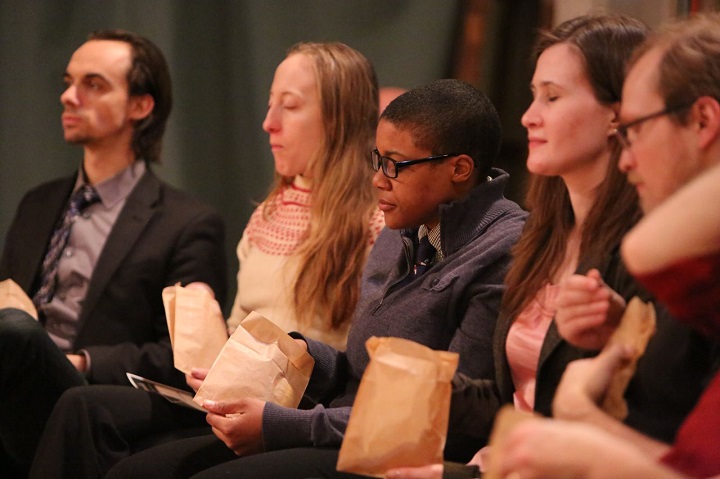 “That seemed to make a natural connection between the audience and the performance,” Sipe said. “As I started to do that, the chocolate [business] started to grow, and people wanted to know where they could buy it. So the business model is to provide a revenue stream for making dance and supporting the arts.” The chocolate is a sweet bonus.

Chocolate Dances is a sponsored project through Fractured Atlas, a nonprofit that provides business tools for artists, so it functions as a nonprofit. “It’s not about making money; it’s about creating a sustainable dance community,” Sipe explained. Between the chocolate sales, grants and private donations, Chocolate Dances is able to create not only performance opportunities for dancers, but also classes and workshops. Sipe makes her chocolates locally, at the Entrepreneur Space (a program through the Queens Economic Development Corporation) in Long Island City. She’s been there since 2013, right around the time she formed Chocolate Dances and held her first show with chocolate tastings. Entrepreneur Space is one of the few kitchen incubators with a temperature-controlled space, Sipe said, and keeping a consistent temperature is very important when making chocolate. She rents out kitchen space by the eight-hour shift, and she’s always surrounded by other local makers. “Sometimes when I go in there, there’s a bakery room so there will be people making bread, barbecue sauce, tempeh,” she said. “There’s a woman who presses her own oils from different seeds.” Although Sipe lives in Washington Heights, she’s happy to have found the Queens community.

“The Entrepreneur Space has been really great and really supportive. Pretty much everyone is based in Queens and close by,” she said. “Entrepreneur space, since it’s connected to QEDC, provides a lot of business coaching for free. As an artist/creative person, I had a big learning curve about how to run a business, so that’s been a really great resource.” She’s also made a lot of connections with Queens artists and entrepreneurs through working in Long Island City.

The other women behind Astoria Tiny Market found Sipe through Entrepreneur Space when they were looking for a chocolatier, so Sipe became one of the founding members of the market, and she said that these “strong women entrepreneurs and artists” really support one another. You can also find Sipe’s confections at Rockaway Brewing Company in Long Island City, which hosts food vendors on weekends, she said. Chocolate Dances’ next performance, “The Chocolate Dances Costume Party Tasting Performance,” will be held at Triskelion Arts in the Muriel Schulman Theater (106 Calyer St., Greenpoint, Brooklyn), so you’ll have to brave the G train to get there, but the unique experience (and the sugar rush) will make the commute worth your while. The contemporary dance theater piece features actors, dancers, performance artists and live musicians — and, of course, chocolate. It begins with a “chocoholics anonymous” meeting, during which the characters are trying to remove chocolate from their lives.

You can imagine how that works out. The whole performance is a chocolate tasting, so you’ll be able to taste chocolate in different forms from cocoa beans to discs of chocolate to the aforementioned truffles. Yes, it is a costume party, so come in costume or borrow one once you get there. The show will be held on two nights only, at 8 p.m. on Wednesday, Oct. 11, and Saturday, Oct. 14, so snap up your tickets ASAP. Tickets are $30 in advance or $35 at the door and can be purchased at chocolatedances.com. Be prepared for an experience you’ve never had before: “What I’ve found is that [chocolate tasting] creates a very natural form of interaction between the performers and the audience. Chocolate has a tendency to make people feel silly and happy, and when you give people chocolate, they will do anything,” Sipe said, laughing. If you don’t normally like audience participation, don’t worry; Sipe isn’t usually a fan of it, either. “Chocolate makes people engage in a very natural way,” she promised. “I hate going to shows where it’s like, ‘It’s time for the audience participation.’ Chocolate gets them engaged in a way that feels very natural and fun.”