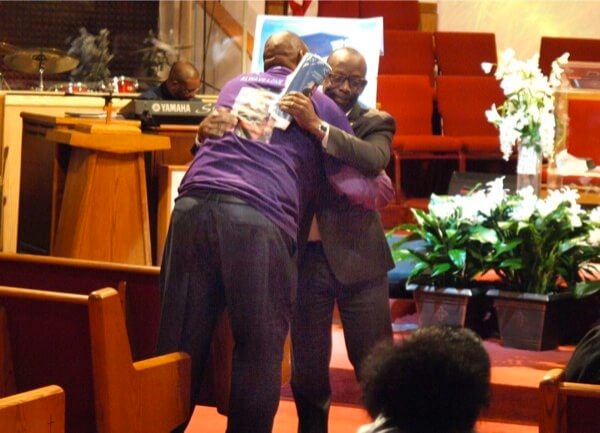 At Mount Moriah AME Church in Cambria Heights, a service to mark the one-year-anniversary of the devastating Queens Village fire that killed five young people ends with Council member Daneek Miller (r) embracing Glenford Edwards, father of one of the teens who died.
Courtesy of Miller’s office

Melody Edwards, one of five victims who perished in a fire last year in Queens Village, was remembered at a memorial on the one-year anniversary of her death at Mount Moriah AME Church in Cambria Heights Monday night.

Before the service family, friends, clergy and elected officials marched from 112-16 208th St., the site of the disastrous blaze that also took the lives of her family friends, Chayce Lipford, 2; Rashawn Matthews, 10; Jada Foxworth, 16; and Destiny Jones, 20.

The five victims perished in a four-alarm fire in a frame house, and neighbors saw smoke around 2:30 p.m. A bystander called 911 at 2:36 p.m., and four minutes later the first responders rushed to the scene, according to the FDNY. By the time fire marshals arrived the blaze spread to the homes at 112-12 and 112-18. Investigators discovered the original home did not have a working fire alarm.

At the memorial Melody’s siblings, godmother, friends, teacher and parents reflected on her life.

Last year Rosezetta Edwards, Melody’s mother, could not bring herself to speak at her daughter’s wake, which was held at the same church in May 2017. But after the outpouring of love that she has received since her daughter’s death, she wanted to thank everyone for their support at Mount Moriah.

“Every one of you counted toward my healing process,” Edwards said. “I lost my sister at a young age, and I asked my mother ‘how did you deal with it?’ And she said ‘you just have to keep going on.’”

Melody was named after Edwards’ sister, who died when she was young.

Despite the hardship that came with losing her daughter, the second youngest of four, Edwards took pride in learning that Melody had left an indelible mark on the people she met with her exuberant spirit, blunt honesty, wise cracking nature and megawatt smile.

“I loved her, she loved us and she loved everyone,” said her mother. “We have to uplift each other. Each one, teach one and reach one.”

Some of the stories that touched her mother and her father, Glen Edwards, included one from her debate teacher at PS/IS 270 in Rosedale reflecting on how the teen went to school officials to intervene when a gang was recruiting a shy friend of hers.

The juniors she befriended and mentored at Queens High School of Teaching, Liberal Arts and the Sciences in Glen Oaks recalled how Melody would crack jokes, but also stop them in the middle hallway to brusquely ask them about their grades and told them to do everything they could to graduate.

“June 25 is my graduation date,” said one of the students who is now a senior. “I am going to make sure that I will dedicate my hat to her.”

Sheener Bailey Briggs, the cousin of sisters Jada and Destiny, great aunt of Rashawn and great-great aunt of Chayce, threw a benefit concert on July 14 to help rebuild the Queens Village home that belonged to her sister Dajuana Green. Melody frequently stopped by the Green home to hang out and study, said Bailey Briggs, who considered a niece.

Green was the mother of Rashawn and the grandmother of Chayce.

Since the benefit the house has been knocked down for rebuilding efforts. Bailey Briggs will be participating in Ms. Full Figured USA at the Robert Treat Hotel in New Jersey on Saturday at 6 p.m. and her platform is on fire safety and awareness.

“I’ve dedicated my platform to my family and others who have experienced such a horrible tragedy,” said Bailey Briggs.

In attendance at the memorial was City Councilman I. Daneek Miller (D-St. Albans), who gave few details, but announced that a street will be renamed in honor of the 17-year-old volleyball and track star who wanted to study law after graduating what would have been her senior year.

“Melody will continue to hold us up,” said Miller. “She set the standard for the next generation.”