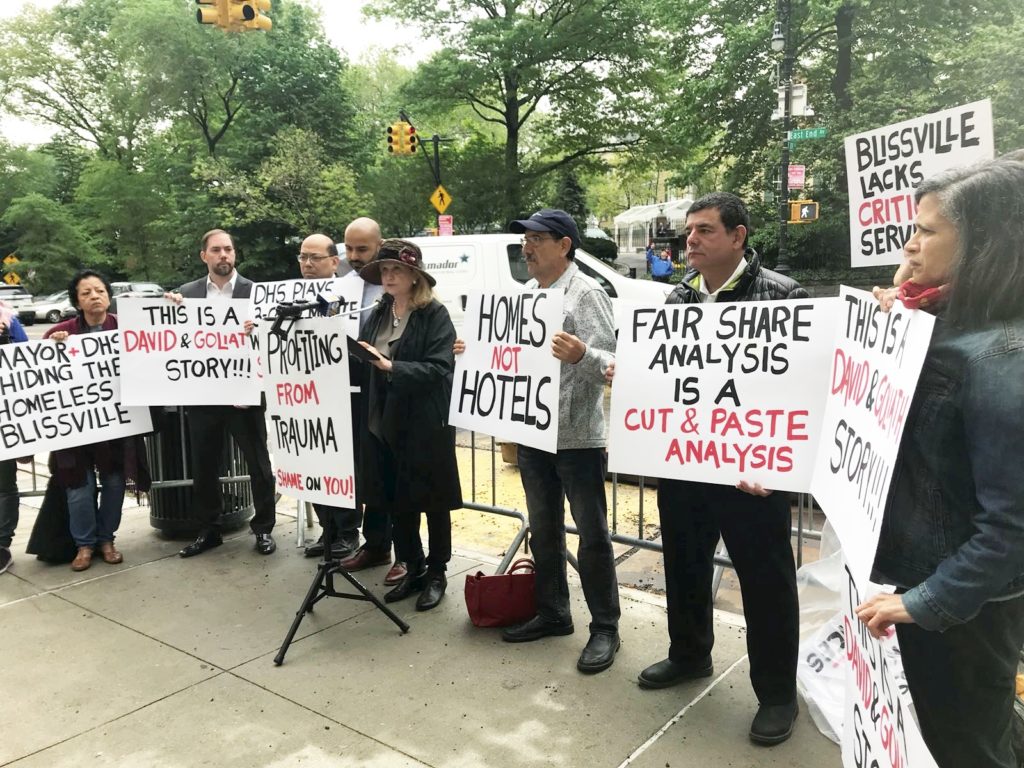 Blissville residents and elected officials came together on May 14 and 15 to protest the siting of the third homeless shelter in the small Long Island City community.

These protests come in the wake of the May 16 closure of the Fairfield Inn, the hotel which the Department of Homeless Services (DHS) plans to convert into a 300-person shelter. This new shelter, located at 52-34 Van Dam St., would be the third in Blissville within the span of a few months.

The first shelter in the community is the City View inn at 33-17 Greenpoint Ave., which houses about 100 single men. The second shelter is Sweet Home Suites at 38-07 Hunters Ave., home to 150 adults and children. Though residents maintain that they are not acting with a NIMBY (not in my backyard) attitude, they said that they fear that the homeless will outnumber the residents in an area that they claim is already lacking the proper resources.

On May 15, residents and members of the newly formed Blissville Civic Association were joined by Councilman Jimmy Van Bramer and David Aglioloro from Assemblywoman Cathy Nolan’s office on the steps of City Hall. DHS Commissioner Steven Banks testified in front of the City Council moments before the protest.

“Blissville has seen the opening of three shelters within just a few blocks of each other in recent months. It is unfair and unwise to continue to site shelters in a small, isolated area that is lacking many basic services,” Van Bramer said.

According to the Blissville Civic Association, elected officials including Congressman Joseph Crowley, Congresswoman Carolyn Maloney, Assemblywoman Catherine Nolan and state Senator Michael Gianaris have signed a letter to the mayor drafted by Van Bramer “to rescind the plans for a new shelter at the Fairfield Inn and find another location that would be more suitable.”

Blissville is a community located in a small corner of Long Island City between the 1st Cavalry Cemetery, the LIE and Newtown Creek, and is home to about 450 people. Many residents of this small community claim Spanish as their first language, followed by English and Bengali.

The day before the City Hall demonstration, the Blissville Civic Association staged a protest in front of Gracie Mansion, where Maloney echoed the feelings of Blissville residents.

Residents expressed their frustration at the DHS for not fulfilling their due diligence to the community.

“No one came and talked to us,” said Ferwah Rizvi, a resident and member of the Blissvile Civic Association. “That said, as is mandatory, DHS and the provider Home/Life Services did hold a town meeting, but that is all. Questions to DHS have typically taken two to three weeks for answers. We have had to file FOIL requests for the proposal and contracts, and that’s been nearly a month ago, and who know when they will arrive?”

Rizvi added that the situation is a human rights issue, and the Fairfield Inn is not equipped to be a home. She said that the hotel does not have a kitchen or laundry room and residents would have to go half a mile to wash their clothes. The nearest resources, including supermarkets, drug stores and the subway stations are a mile away, and hospitals or medical services are 30 to 45 minutes away.

Spokeswoman for Mayor Bill de Blasio, Jaclyn Rothenberg said that despite these complaints, the city is moving in a positive direction when it comes to the homelessness issue.

“Homelessness is a citywide challenge that requires a citywide solution, which is why the Mayor put forward a borough-based plan to connect people to the support networks they need to get back on their feet and into permanent housing. Our plan distributes resources and responsibility in a fair way for the first time in our city’s history. This decades-old challenge wasn’t created overnight and it won’t be solved overnight, but we are headed in the right direction,” said Rothenberg.

The Fairfield Inn is set to close for business tomorrow, Wednesday, May 16.

The story was edited at 5:17 p.m. to reflect comments from City Hall.