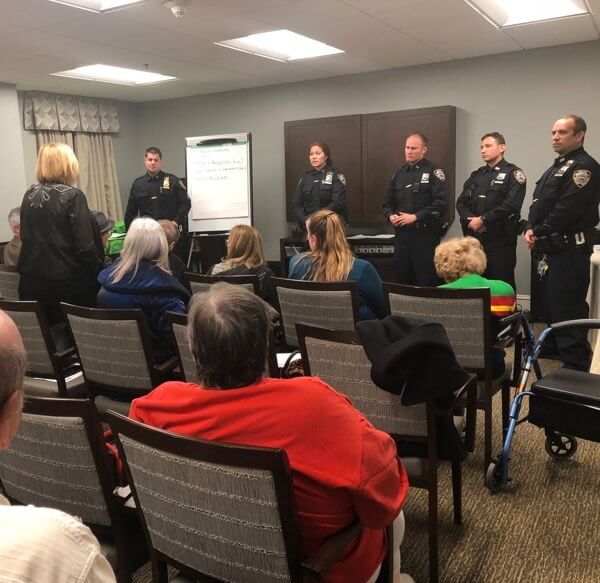 Kew Gardens residents met their Sector C Neighborhood Coordination Officers Tuesday night at the 102nd Precinct’s Build A Block Meeting to express concerns and complaints of issues in the neighborhood.

Sector C, known as Charlie, covers the north side of Jamaica Avenue by the Van Wyck Expressway to Forest Park, and the Jackie Robinson Parkway.

The NCO officers noted that the issue of homeless residents in Sector C is a “hot button issue” on their study sheet, that won’t be removed anytime soon.

Rayad Khan, a resident of Kew Gardens, said he has seen homeless people loitering in the park near the E-train subway station.

“I see people drinking there on a daily basis at different times during the day,” said Khan. “I go in to get breakfast, and these guys are kicking back at 9 in the morning.”

According to Edelstein, the NYPD Homeless Outreach Unit and Breaking Ground, a nonprofit organization that covers Queens offering services to homeless residents and other vulnerable New Yorkers, has been going to Jamaica Van Wyck at least four times a day.

“Breaking Ground tries to build a personal relationship with them, until eventually they agree to go to a shelter,” said Nelson. “If that person says no, there’s nothing we can do to move them off the streets.”

According to Nelson, if homeless residents are drinking or urinating in the area, they are issued a summons, and there have been some arrests of people walking down the street panhandling.

“We’ve sent some to the hospital who are sick, and they come back out of there and do the same thing all over again,” said Edelstein.

Other residents complained about homeless people loitering under the LIRR train tracks late at night. Speeding and noise pollution from cars and trucks have also been plaguing the neighborhood.

A resident, who chose to remain anonymous due to safety concerns, said she has continuously dealt with people blasting loud music, doing illegal drug activity, and couples having public sex on 114th Street and Bessemer Street.

According to the woman, she has called 311 and 911 numerous times and confronted the men loitering in front of her home, who have thrown bottles and threatened her.

“They seem to gravitate to this block because it’s a dark, quiet area,” she said. “All I’m asking is for more police presence in the area.”

Nelson reassured residents that the NCO’s have been resolving issues for the past two months, and encouraged them to directly contact the officer’s through phone call, text messages or e-mail.

“You guys in the community are talking to the officers, who study the sector sheet. Relay all of your complaints to those officers covering Sector C Charlie, and they will give you resources,” said Nelson. “We’ll look into things and address them to the best of our abilities.”

According to Khan, it’s useful for residents attending the Build A Block Meetings to have a voice for their community, and form a good relationship with NYPD officers to alert them of certain issues.

“I think that we want to have good relations and have an effective police force that meets the needs of the residents,” said Khan. “It’s always worthwhile to sit down and have a dialogue.”