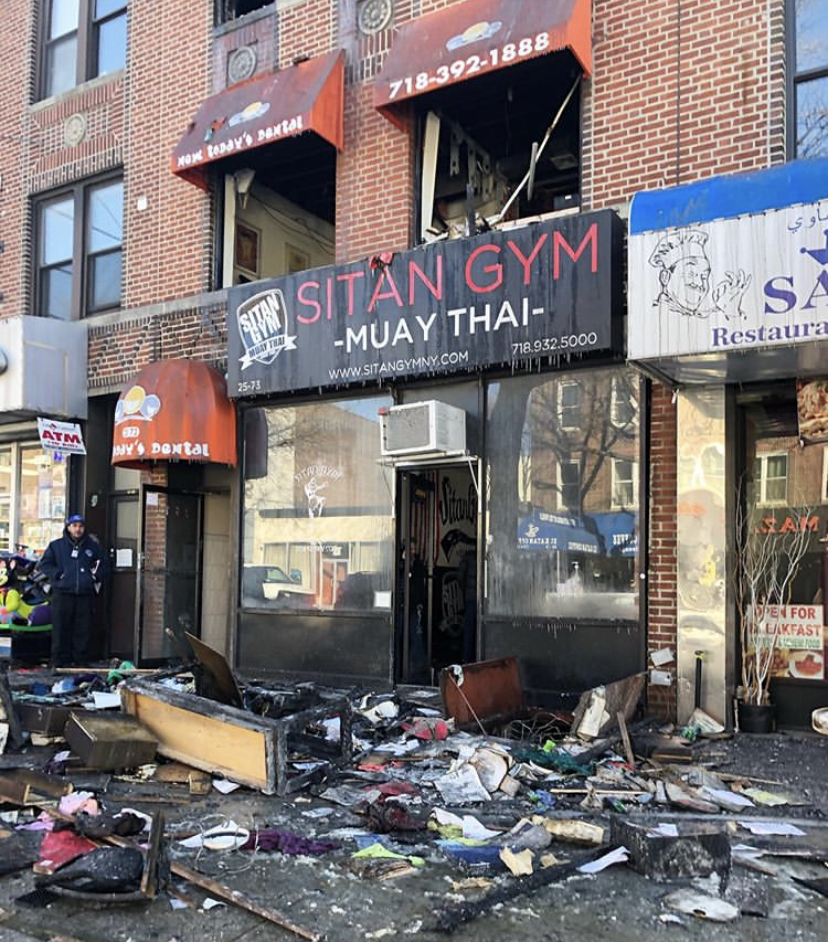 After a fire destroyed the respected Sitan Muay Thai Gym in Astoria last week, its owner and head coach Aziz Nabih is left trying to find a new space for the first time in almost 30 years.

“I had been there for 27 years, training kids and adults. People that I trained are about 30 now. I had a lot of good memories there,” Nabih told QNS.

According to Nabih, one of the tenants of the building, located on 2573 Steinway St., accidentally started the fire when she lit up her Christmas tree. “She was going to take it out but wanted to light it up one last time, and ended up lighting up the whole building,” Nabih said.

Sitan Gym was on the ground floor, a dentist was on the second and the tenant on the third. Nabih said that although no one got hurt, they did lose everything.

The Thai boxing coach, who is also one of the coaches for Team USA’s Muay Thai boxing, said that he didn’t even think about starting a GoFundMe and instead started looking for a space immediately.

But thanks to his former student, Rami Ibrahim, who created a GoFundMe page to “Rebuild Sitan Gym” that same night, the gym has raised more than $43,000 in a matter of six days.

“At night someone just called me and said, ‘Did you see the GoFundMe?’ So all the credit goes to him,” Nabih said.

Nabih said the community has been incredibly helpful, with one gym on Steinway Street and 34th Avenue even offering their space for him to use to train some of his students. Another gear company in Florida, Muay Thai Addict, is selling items with a percentage of the profits going to Sitan Gym.

At an upcoming fight at Broad Street Ballroom in Manhattan, where one of his fighters was supposed to compete but won’t be able to make it anymore, they’re also raising funds for them.

“I didn’t want this to happen but it feels nice to see people helping, especially the Muay Thai community,” Nabih said. “Bad things happen but it brings people together, and makes you appreciate people more. We were always there for people too, so I guess now it’s our turn.”

Although Nabih is grateful for all the help the community has given him, he’s realized how expensive rent is in Astoria. He said he’s looking at a few spaces, but one space in particular is $10,000, and in order to replace the equipment it’ll cost about $60,000 to $70,000.

Nabih also wants to emphasize to other business owners to have their business insurance ready. His insurance expired prior to the fire and he forgot to renew it in time.

In the meantime, Nabih is still training his students, including two who will represent Team USA in a Muay Thai international competition.