How three life-saving Queens ambulance corps got their start: Our Neighborhood, The Way it Was 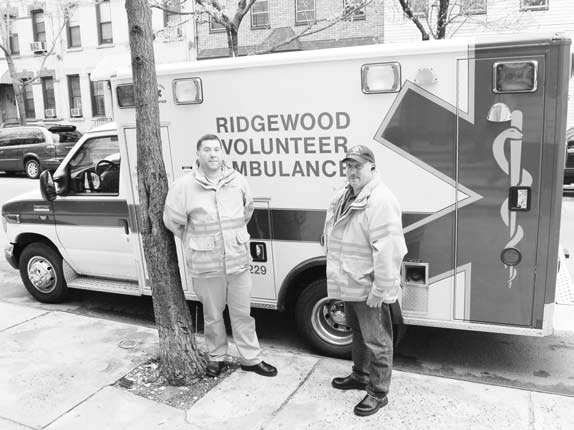 For many of us, the COVID-19 pandemic brought us a greater sense of appreciation for paramedics and emergency medical technicians who answer calls of distress and put their own lives on the line to save others in need.

While New York City employs thousands of professionals who respond to the medical needs of the public every day, there are also within our communities dedicated teams of volunteers who also provide life-saving services to the public.

In the 1970s, at a time when the city grappled with a major financial crisis that resulted in cutbacks to first responder units, the Ridgewood, Glendale and Middle Village communities banded together to form their own volunteer ambulance corps to help serve each other. As they approach their fifth decade in service, the volunteer corps are more vital today than ever — as the pandemic has proven.

We’re proud to share with you the stories of how each of these corps got their start.

Middle Village first on the scene

Our neighborhood’s first volunteer group of medical first responders was the Middle Village Volunteer Ambulance Corps (MVVAC), which was formed in 1972 and received its charter from the state on Jan. 25, 1974.

The corps rented a storefront in February of that year, and then launched a door-to-door fundraising campaign to buy an ambulance and procure supplies. MVVAC members walked the streets of the greater Middle Village area distributing fact sheets and contribution envelopes, with all proceeds going toward the purchase of an ambulance.

MVVAC obtained its first ambulance on May 25, 1974, and they answered their first call for service on May 31, 1974. Partial service began the following day.

MVVAC’s headquarters, a 1975 Oldsmobile ambulance and its membership were formally dedicated to service on June 9, 1974. By November, it expanded into a 24-hour operation on weekends. Its new 1974 Dodge ambulance van was also put into operation.

By the late fall of 1974, the MVVAC had over 20 EMTs on call. By the end of 1975, the corps had responded to more than 700 calls for assistance, with a response time of three to five minutes.

The growing corps needed additional space, so it then relocated and refurbished a second headquarters on April 1, 1976.

Not to be outdone, a small group of Glendale residents decided to launch its own volunteer ambulance corps in March 1973 to serve the community.

The Glendale VAC’s first headquarters was located on 69th Street off Myrtle Avenue, and all of its members were enrolled in standard and advanced first aid courses, becoming certified emergency medical technicians.

The corps’ first vehicle was a 1970 Dodge ambulance formerly used by Wyckoff Heights Hospital before the hospital discontinued its ambulance service at the time. This ambulance was to be designated “Glendale One,” and on March 1, 1974, at 7 p.m., the Glendale VAC opened their door and began providing the community of Glendale with much-needed ambulance service.

The generosity of residents, workers and business concerns of the community, as well as others who support the Glendale VAC, made possible the purchase of a fully equipped, 1975 Yankee Coach Dodge Ambulance, which the corps placed into service in mid-April 1975 as “Glendale Two.”

The need for a larger headquarters was also evident, with the lack of space for training classes and equipment storage at the 69th Street headquarters. After checking the locations available for rent, the corps decided that the Glendale VAC would make their new home at 66-20 Myrtle Ave., less than a block from the Glendale firehouse.

In September 1975, the Glendale VAC was hit hard by the tragic and untimely death of Frank P. Libraro, 22. He died on Sept. 2, 1975, of injuries sustained when the ambulance he was riding in as an attendant was involved in a crash with another automobile on Aug. 21, 1975.

More than 2,500 members from volunteer ambulance corps and other organizations paid their final tribute to Libraro, who gave his life serving the needs of others.

The corps also loaned, free of charge, items such as crutches, wheelchairs, canes, commodes and hospital beds to those in the community in need of them.

The Ridgewood Volunteer Ambulance Corps arrived on the local scene on Sept. 1, 1975, providing the area with free ambulance service and emergency first aid.

The corps operated 12 hours a day and 24 hours on the weekends, and was based in 1977 out of two storefronts at 66-20 Fresh Pond Rd., with more than 100 active and non-active members putting in two or more six-hour shifts each month.

The Ridgewood Corps was able to purchase a 1969 air-conditioned Cadillac fully equipped with oxygen, suction and other life-supporting equipment through contributions received from individuals and organizations before the corps went on the road. Equipment was loaned free to residents for those who need it.

Each volunteer underwent an extensive and modern 56-hour advanced first aid course, while six members went on to a 91-hour EMT course.

In recent years, as funding and membership waned, the Ridgewood, Glendale and Middle Village Volunteer Ambulance Corps decided to come together and work with each other, rather than as separate entities.

As the Ridgewood Times reported in April 2019, the units decided to maintain their individual identities while operating as one cohesive organization:

Sean Graves from the Ridgewood Volunteer Ambulance Corps told those at the Community Board 5’s April 10 meeting that with so many commonalities between the three organizations, operations would streamlined into one.

“This was an effort undertaken by both parties to ensure the longevity of volunteer ambulance services throughout the community,” Graves said. “We also have the Glendale Volunteer Ambulance Corp. who has come to the table and we are merging with them. As of today the Ridgewood [VAC] owns and operates all three services.”

Graves said that city ambulances in Board 5 are critical since recent incidences of city services taking longer to reach patients in a timely manner.

Community VACs are only meant to be a supplemental service to professional ambulance providers such as through the city, but Graves stressed the importance of having responders at scenes to provide aid regardless.