Holy cow! The ‘Glendale Gnome’ who became a Yankee legend: Our Neighborhood, The Way it Was

We can’t think of an athlete who grew up in the Greater Ridgewood area who accomplished more than Phil Rizzuto.

Most readers today remember him from his days in the broadcast booth, when the lovable “Scooter” called Yankees games for WPIX-TV. Of course, that was only the second chapter of Rizzuto’s Yankee life; the first was his distinguished career on the diamond, where No. 10 made the All-Star team five times and helped the Bronx Bombers win seven World Championships in 12 seasons between 1941 and 1956 (he spent three years in combat during World War II).

Few, however, may realize that Rizzuto, who was born in Brooklyn, spent his formative years in Glendale. He went to Richmond Hill High School, where he became a star on both the baseball diamond and the football gridiron.

Despite his diminutive size, he was big on heart and talent. Scouts realized he was something special, and in 1937, the Yankees signed Rizzuto to a free agent contract. He would eventually be assigned to the Kansas City Blues, the Yankees’ farm team in the minor league American Association. There, he demonstrated that he had what it takes to contribute to the Yankees’ success in the big leagues.

The Ridgewood Times, in its July 25, 1941, issue, profiled one special achievement Rizzuto earned: The Sporting News Trophy as the Most Valuable Player for the American Association in 1940. Rizzuto received the honor prior to the start of the July 22, 1941, game between the New York Yankees and Cleveland Indians, amid Rizzuto’s first full season in pinstripes.

Although Yankee broadcaster Mel Allen would eventually give Rizzuto the “Scooter” nickname that stuck with him in Yankee lore, Ridgewood Times readers knew of Rizzuto by several other nicknames, as you’ll see in the July 25, 1941, report:

“The Flea, who replaced the veteran Frankie Crosetti this year in the short field, took part in 140 double plays with Kansas City last campaign, and was the only player in the AA to make 200 hits.

“Glendale’s little package of dynamite was given the award by Newbold Morris, president of the City Council. Rizzuto celebrated with a brace of singles and a stolen base as the Yankees won, 4-3.

“Now in his 22nd year, Rizzuto lives at 78-01 64th St. His five-feet-six inches and 160 pounds make him the smallest ballplayer in the Big League.

“With the Yankees, Rizzuto is batting well over the .310 mark, second only tot he Yankee Clipper, Joe DiMaggio, who is blasting away in the .370s. Afield Lil’ Phil has played a brilliant game and is considered by some experts as the ‘rookie of the year.’

“The Glendale Gnome is a product of the Richmond Hill High School baseball squad. With Gerry Priddy, he combined to become the outstanding double play combination of the Mid-West.

Rizzuto finished his 1941 campaign with 158 hits in 515 at bats, good for a .307 batting average. The article pointed out DiMaggio’s .370 batting average; the article was published just a few days after DiMaggio’s historic 56-game hitting streak was snapped.

But Rizzuto’s best season wouldn’t come until 1950, when he won the Most Valuable Player award. That year, Rizzuto had 200 hits in 735 and scored 125 runs, while also helping the Yankees win the second of five consecutive World Championships between 1949 and 1953.

After retiring, Rizzuto joined the Yankee broadcast booth, where generations of baseball fans would grow to love him for his excitement over great plays (“Holy cow!”), malapropisms and stories of his playing days. His most famous call came on the last day of the 1961 season, as Roger Maris hit his 61st home run of the campaign, breaking Babe Ruth’s single-season home run record.

“Fastball, hit deep to right, this could be it! Way back there … holy cow, he did it! Sixty-one for Maris!”

Rizzuto had plenty of family in Glendale long after he left the neighborhood. The Ridgewood Times profiled a cousin of the Scooter, Ernest Furone, in the Aug. 23, 2007, issue, a week after Rizzuto’s death.

“In recalling the New York Yankees baseball player and announcer known as ‘The Scooter,’ who died at the age of 89 on Aug. 13, Furone noted that his first real meeting with Phil Rizzuto occurred ‘sometime in the late thirties,’ before Phil began his 13-year career with the Yankees in 1941.

“The occasion was a wedding reception for Phil’s sister Rose in the basement of the Rizzuto family’s Liberty Park home at 64th Street and 78th Avenue, just south of Cooper Avenue. …

“’When Philly became famous, naturally, I realized that he was related to me — and I always rooted for him and the Yankees,’ said Furone. …

“Of the original photos of Phil Rizzuto that his second cousin does possess, the most recent was taken in 1988, when Phil came back to the Glendale area to make a personal appearance on Myrtle Avenue at the since-departed Hamilton Federal Savings Bank (now a Ridgewood Savings Bank branch). Ernest Furone went and presented Phil with a scrapbook — an exchange that was photographed by Ernest’s daughter, Diane Shendler, also of Glendale.” 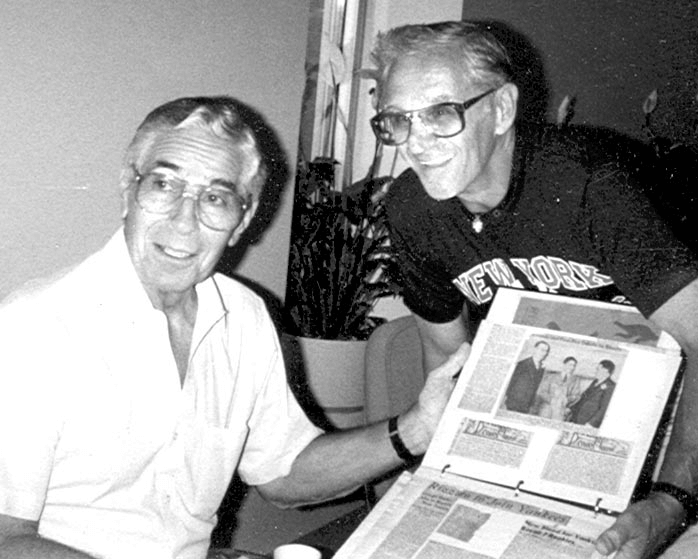 As it happened, Rizzuto wasn’t the only Yankee legend who grew up in Our Neighborhood. Bob Sheppard, the legendary, god-like public address announcer of the old Yankee Stadium, grew up in Ridgewood but eventually relocated to Richmond Hill. Sheppard would call more than 4,500 games, with his last game occurring in the 2007 playoffs, just two years before his death at the age of 99.

Sheppard had started his career with the Yankees in 1951, and Rizzuto was one of the first Yankees players that he called to the plate on opening day of that season.