Bar stories across the street, and across the tracks, in Glendale: Our Neighborhood, The Way it Was 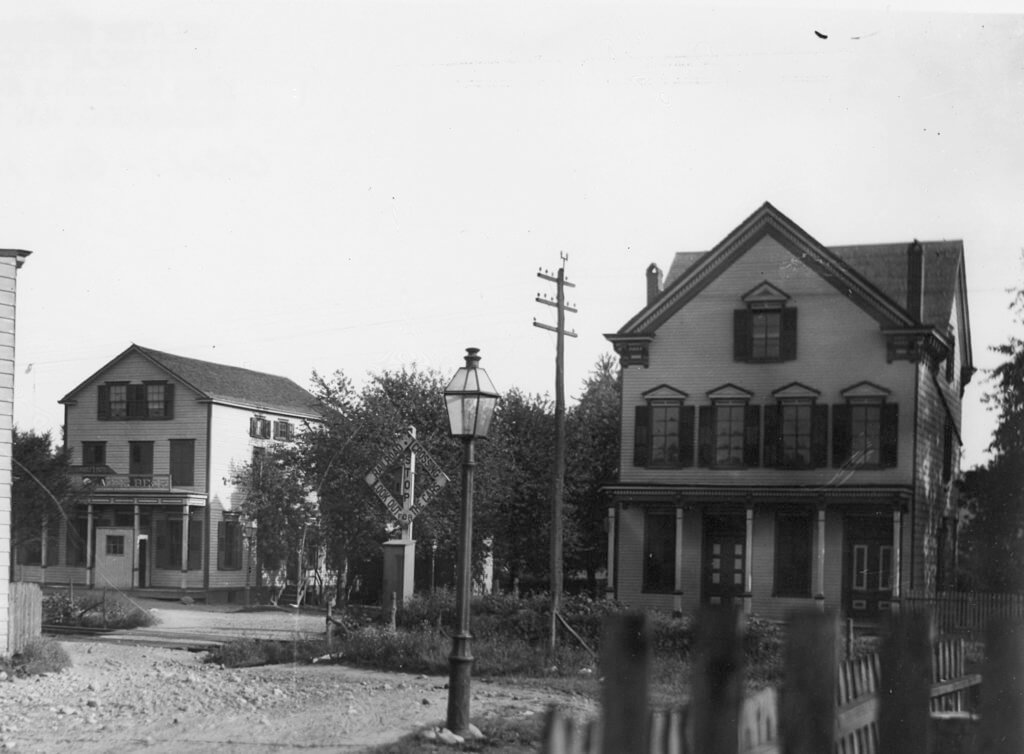 Long ago, on the southeast corner of 73rd Street and Edsall Avenue in Glendale, stood a historic tavern that was operated for many years by the Gundolff Family.

George Gundolff was born in France and came to America in 1887, at the age of 27. Soon after his arrival in America, he got married and settled in Glendale.

We believe that he purchased several lots on the southeast corner of Railroad Avenue (later Edsall Avenue) and Wyckoff Avenue (present-day 73rd Street) from William Johnson. Following the sale, he had a 2 ½-story wooden frame building erected.

He opened a florist shop catering to the Lutheran (present-day All Faiths) Cemetery trade, which used the rear entrance at this location. He had his greenhouse in the rear on 73rd Street.

Across the street on the southwest corner of present-day Edsall Avenue and 73rd Street was the saloon of Christian Kirschmann. On the north side of the railroad, just to the east of the entrance to Lutheran Cemetery, was the florist shop of Philip Knack. He had his greenhouses located adjacent to his shop.

In 1882, Kirschmann — who came to America from Germany in 1864 at the age of 22 — had signed a five-year lease with Philip Kern at $360 per year for a building in which he intended to operate a saloon. It was on the south side of Metropolitan Avenue, just to the west of the terminal of the elevated train there; this is the present-day Metropolitan Avenue-Middle Village subway station.

In 1885, Kirschmann decided that he would acquire property at the rear entrance to Lutheran Cemetery in Glendale, and have a building erected there for a saloon. On Sept. 28 of that year, he purchased a 25-foot-wide lot from John King for $400. That lot was fronted on Railroad Avenue and was adjacent to the southwest corner of Wyckoff Avenue and Washington Avenue (present-day 72nd Street).

A few days later, on Oct. 3, he purchased the corner lot, also 25 feet wide, from Angeline Lilly for $600. He then hired a builder to construct a 2 ½-story wooden frame building which was ready the following year. There he opened a saloon and hotel on the premises.

On Oct. 14, 1892, John Siney sold to George and Karolina Gundolff two lots measuring together about 50 feet by 112 feet. The lots were located on the south side of Railroad Avenue mid-block between Madison Avenue (now 71st Place) and Washington Avenue (present-day 72nd Street). The price for the two lots was $600.

On the lots, George Gundolff erected a two-story house. Shortly thereafter, he started to use part of his original building on the southeast, the corner of Railroad and Wyckoff avenues, as a saloon and hotel.

By 1900, Kirschmann found himself in legal and financial trouble. After losing a lawsuit in Brooklyn Supreme Court, he reported that he couldn’t pay the claim against him. The judge in the case then ordered that Kirschmann’s property in Glendale be sold at public auction. On July 11, 1900, Joseph Bermel, who owned a monument yard on Metropolitan Avenue near Dry Harbor Road (present-day 80th Street) in Middle Village, was the highest bidder at $4,450.

George Gundolff lived above the saloon with his wife, Karolina, and their four children: Elizabeth, George, Karolina and Bertha.

With Kirschmann having problems, Gundolff moved the florist shop to the rear of the building, and expanded the saloon. His saloon business prospered as the population of Glendale increased from the many new homes being built in the area, and also from the commuters who used the Long Island Rail Road (the station in Glendale was located a block away at 73rd Place, which was then called Clinton Avenue).

In addition, some of the visitors to Lutheran Cemetery were also patrons at the saloon. By 1905, his saloon’s volume was such that he decided to discontinue his florist shop, and used the area in the rear for a wagon shed for his customers.

Another florist who catered to the cemetery trade near the rear entrance to Lutheran Cemetery was F. Bosshart, who had a shop and greenhouse on the east side of Washington Avenue (72nd Street), between Central and Edsall avenues.

Gundolff’s saloon operated until National Prohibition took effect on Jan. 17, 1920. We believe that George Gundolff passed away prior to the repeal of prohibition in 1933.

Thereafter, Karolina Gundolff saloon as a tavern. “Ma Gundolff,” as she was known by her customers, was 70 years old when Prohibition ended, and she ran the tavern until her death in the late 1940s.

Ma Gundolff was remembered as being very strong and having a large pair of hands. She could lift a half-barrel of beer — weighing about 135 pounds — and place it in the ice chest back of the bar.

After her death, it became known as Richards Tavern. We’re not sure when the tavern closed.

Today, the former Gundolff and Kirschmann Saloons serve as homes and offices. The former florists across the street and across the tracks are now small offices as well.

The Glendale railroad station has been closed for more than 20 years now. It went out of service in 1998 along with several other former passenger stations on the Lower Montauk Branch of the Long Island Rail Road.

The rail line is presently used by New York and Atlantic Railway for freight operations emanating out of the nearby Fresh Pond Railyard.

The little-used entrance to the Lutheran/All Faiths Cemetery remains in place across the tracks from the corner of Edsall Avenue and 73rd Street.

Reprinted and updated from the Feb. 7, 1986, issue of the Ridgewood Times.