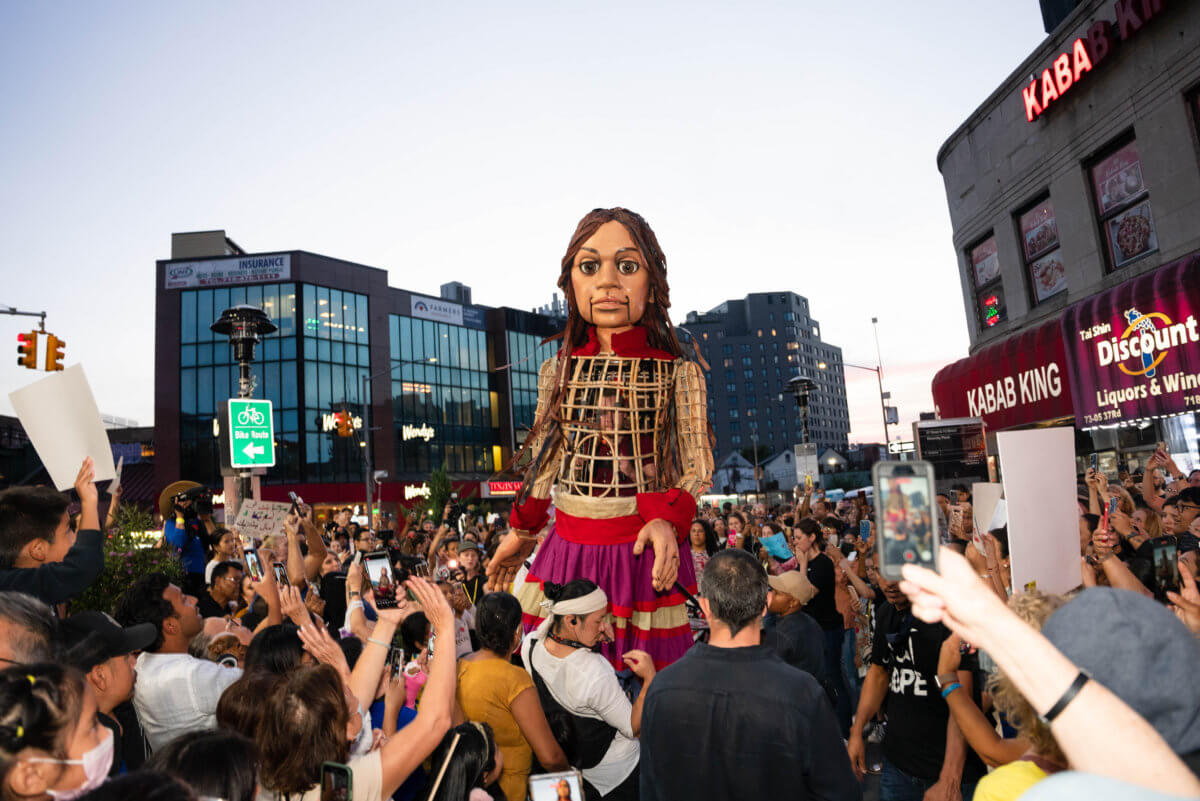 Little Amal paid a visit to Diversity Plaza in Jackson Heights during her second tour of Queens. (Photo by Simon Wade)

Little Amal, the 12-foot tall puppet of a 10-year-old Syrian girl fleeing her war-torn country, wrapped up a 17-day tour in New York City this weekend with a visit to the Statue of Liberty on Saturday. One of the largest public art exhibitions in city history captivated tens of thousands of spectators across the five boroughs, as Little Amal, whose name means “hope” in Arabic, raised awareness of the millions of young refugees and asylum seekers worldwide.

The visit to Liberty Island comes at a time when the city is grappling with an influx of more than 16,000 asylum seekers over the last few months, according to the Mayor’s office.

“Little Amal represents refugee children around the world who have fled persecution in search of a safer and brighter future. Her presence is inspiring, hopeful, and needed at this critical juncture in history,” Adams said.

“It’s imperative that we treat them with dignity, respect, and compassion,” Adams said. “Whether it’s mental health support, food assistance, or other resources, our city must provide the services needed for them to be safe and supported. This is an international crisis that requires coordinated partnerships from all levels of government.”

Little Amal arrived in Queens at JFK Airport on Sept. 14 and visited Jamaica and Astoria that first evening. During her walking tour of the five boroughs, she made stops at the Brooklyn Bridge, St. Patrick’s Cathedral, Central Park, and the Port Authority Bus Terminal where she welcomed some of the young asylum seekers sent to New York from the southern border. She also visited Times Square, but she came to the true crossroads of the world with her second visit to Queens on Sept. 21.

Little Amal visited a community garden in Flushing Meadows Corona Heights created by Mujeres en Movimiento and stopped by the Queens Museum before being greeted by thousands at Diversity Plaza in Jackson Heights, including Assemblywoman Catalina Cruz, who was born in Colombia and came to Queens at the age of 9. Cruz grew up as a DREAMer; and lived in the U.S. for more than 10 years as an undocumented American, raised by a single mother who, like many immigrants, had to work multiple menial jobs to support her family.

“As the Assemblymember that represents one f the most diverse communities in the world, migration and cultural diversity should always be celebrated and recognized,” Cruz said. “Little Amal tells the story of the contributions made by refugees and immigrants in their struggle to raise awareness and change the narrative revolving around the refugee crisis. Like Little Amal, I will continue to fight for migrants and refugees to have their voices heard.”

Before he was the first Indian-American ever elected to the City Council in NYC history, Councilman Shekar Krishnan was the co-founder of Diversity Plaza, which opened in 2012 serving as a town square in a neighborhood known for its South and Central Asian and Central American immigrants including Bangladeshis, Nepalis, Tibetans, Pakistanis, Mexicans and Guatemalans and many more.

“We welcomed Amal, the symbol of refugees around the world, to the most diverse neighborhood in the world —Jackson Heights,” Krishnan said. “Amal calls on us to open our arms to immigrants, refugees, and asylum seekers and remember our shared humanity. It was deeply moving to host her and for our community to walk with her across the neighborhood, starting, fittingly, at Diversity Plaza.”