In New York City, the very concept of work is changing rapidly with the gig economy taking over the job market. It seems like everyone you talk to these days has a “side hustle” and considers themselves a multi-hyphenate, meaning that they have several job titles. Being self-employed can provide fantastic flexibility, but you also need to add an office space into your already tight quarters at home.

Thor-Harris Partridge is a music producer and DJ, and he also works in real estate. He lives and works out of his beautiful one-bedroom apartment in Astoria. He also grew up here — a native Astorian!

Finding the balance between creating living and working spaces can be a challenge, but Partridge adapts his apartment for whatever mode he is in. In the living room, large speakers loom on either side of a large desk, the only real indication that music is recorded and created here. “I just released my first album on a Brooklyn label called Wonderwheel Productions,” he said. “When I’m in full-on producer mode, this whole room becomes my studio, but now that the album is done, I’m clearing space.” Partridge’s girlfriend, Tiffany Porter, helped him design elements of his apartment, drawing on her background as a designer. Above the sofa, mounted on the wall, is an enormous piece of driftwood, which serves as an artistic accent as well as nature.

“We found the wood in Long Island,” Porter told me. “We were canoeing and spotted it on the beach. When we brought it home, I wrapped embroidery thread around it as decoration.”

The coffee table in the living room also has a natural beachy vibe, but this piece was picked up at CB2, a favorite store of Partridge’s. Another store he recommended in Astoria is called Hour Children’s Shop, he said. “It’s a weird name, but I encourage you to check it out; it’s kind of a home goods thrift store.” In the kitchen, a similar, but larger table is nestled into a breakfast nook and above it on the wall hangs a collection of Maasai ceremonial wedding necklaces. Partridge picked them up on his travels through Kenya and South Africa. The benches either side of the table were reupholstered by Porter. 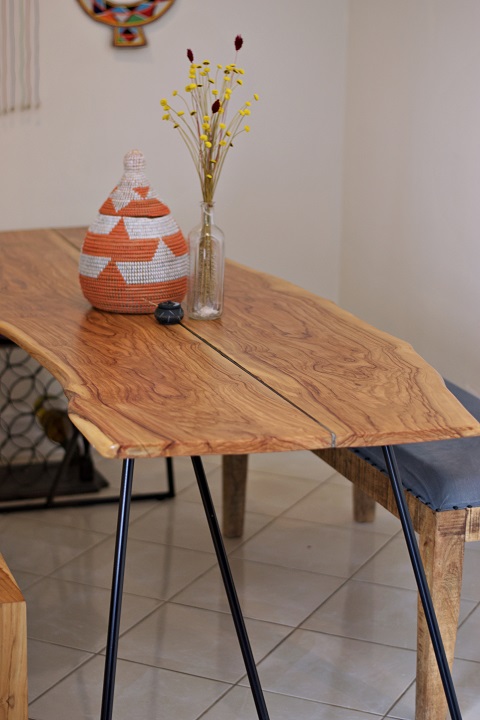 “Tiffany is so creative,” Partridge explained. “She did the stenciling on the wall above the bedroom. She sews and is very crafty.” I asked Partridge if working from home was really the dream that people often suggest it is. He told me that yes, the flexibility was great, but “after working for eight hours on my album, I stop and realize I’m already home. It’s too much sometimes; I never get out of the apartment! I would love to eventually have a studio to go to, but financially it’s tough. I need my work space to inspire my work, a place with windows and light. I could rent a small studio, but I haven’t found anywhere better than my place right now.” In every room in the apartment, the color palette is muted and natural. Plants cascade from shelves, wood is strongly featured and everything seems soft and cozy. It seems to reflect the couple’s lifestyle perfectly. They both work for themselves. “We would hate to have full-time desk jobs,” Partridge mused. “There are so many things we want to do, together and separately.” This Astoria apartment certainly seems to be providing them the space to work on all their projects and the inspiration to create even more.