Douglaston center to get upgrade 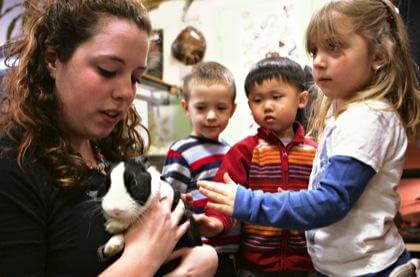 Douglaston’s Alley Pond Environmental Center will undergo a $7 million renovation that will upgrade the Northern Boulevard nature site’s existing building as well as add up to 5,000 square feet of new space, the center’s executive director said.

The center, at 228-06 Northern Blvd., draws an estimated 50,000 adults and children each year to take part in its environmental programs, classes and hikes along its nature trails. But Irene Scheid, APEC’s executive director, said as many as 10,000 schoolchildren are on a waiting list for the activities.

“We don’t have the space to accommodate them,” she said.

Hilda Bloch, fiscal manager for the center, said APEC has not been able to expand for years due to its proximity to marshlands.

“We’re on wetland, so the building won’t support a second floor,” she said. “But we’re going to get some new modules and fix up our building. We’ll try to keep the modules permanently and double our capacity.”

Scheid said a city Department of Environmental Protection project across the street from Alley Pond appears to have caused some damage to the environmental center’s floors and walls. The DEP project, expected to be completed by the end of next year, would halt flooding in Bayside and filter sewer overflow in Douglaston.

“There’s nothing structurally wrong with our building,” Scheid said of the damage. “The building won’t collapse on us, but we’re not looking very pretty.”

She said the center would move its operations into six modules that would be connected to the center through a walkway once construction on the renovation begins. Alley Pond intends to keep the modules after the upgrade, which would add 5,000 square feet of space to the center.

But the city must first put out contracts for soil test and borings at the site before the modules can be put in, Scheid said.

The center, founded in 1972 by a group of teachers who wanted more environmental education in the public school system, is made up of 150 acres of woodland, meadows and marshes.

Scheid said she was not sure when the upgrade would begin nor when it would be completed. In the meantime, the center will continue operating its programming, such as a tea and treasures auction in February and a square dance in March as well as a program involving a live wolf and a blood drive in April.

Alley Pond had some minor renovations 10 years ago, but it has been 30 years since it has undergone a complete upgrade.