Dog put to sleep after beating by Ridgewood owner: ASPCA 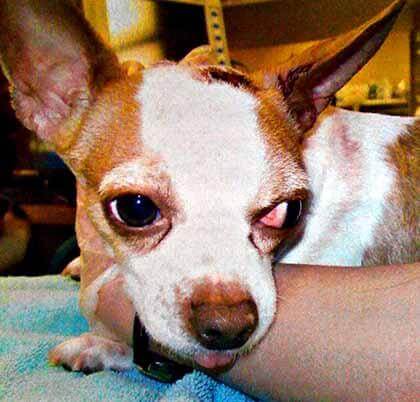 Spotye, the 8-pound Chihuahua from Ridgewood, had to be euthanized after suffering from a skull fracture. (AP Photo/ASPCA)

A 5-year-old Chihuahua had to be euthanized after a Ridgewood man allegedly beat it hard enough to fracture its skull, The American Society for the Prevention of Cruelty to Animals said.

Jerry Melendez, 33, of Ridgewood allegedly admitted to ASPCA officers that he struck his dog Spotye with a metal toy train after he found the dog sitting on the couch at about 5:30 a.m. on Feb. 10, according to a criminal complaint from the Queens district attorney’s office.

Melendez later noticed that the dog was bleeding, the complaint said, and brought Spotye into an animal hospital around noon later that day.

Melendez, who was arraigned on Feb. 19 and released without bail, declined to comment.

Veterinarians, who treated the dog for the fractured skull, hemorrhaging behind its left eye and multiple seizures, suspected foul play and called the ASPCA, according to Joe Pentangelo, assistant director of law enforcement for the society.

The responding ASPCA officer observed the dog’s injuries and witnessed the subsequent euthanasia, the ASPCA said.

The dog was then transferred to the ASPCA Bergh Memorial Animal Hospital where an ASPCA vet performed an autopsy on Spotye and found that the dog’s skull had been fractured into eight pieces by blunt force trauma, the complaint said. Blood was also found in the animal’s abdominal cavity, which according to the complaint indicated blunt force impact to Spotye’s body.

“He apparently became angry at the dog,” Pentangelo said.

The New York Post reported Spotye died after Melendez could not pay for the dog’s medical treatment, although Pentangelo could not confirm that account.

Melendez faces up to two years in prison and a $2,000 fine if convicted, according to the ASPCA.

“I don’t know why he did it, but no animal should be treated this way,” Pentangelo said. '“Animal cruelty is a felony.”