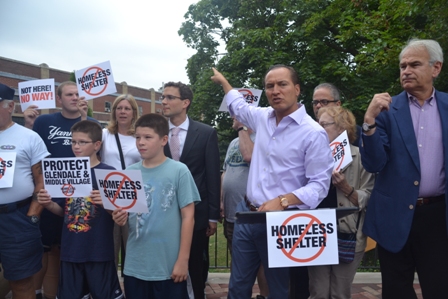 A senior center, a school, maybe even a park is fine, but residents in Glendale want to shut the door on a proposed homeless shelter.

Councilmember Peter Vallone Jr. led a protest on Friday in front a defunct factory at 78-16 Cooper Avenue, which nonprofit Samaritan Village plans to transform into transitional housing if its proposal is approved by the city’s Department of Homeless Services (DHS).

“We are against a 125-unit homeless shelter that the city is planning to ram down this community’s throat,” said Vallone, who is running to be the next borough president. “This is the wrong location and it’s the wrong size.”

The community has been against this proposal since last year when rumors started. But recently Samaritan Village negotiated with Michael Wilner, the owner of the property, and submitted a proposal to the DHS. The nonprofit also sent a letter to Community Board 5 and local leaders to officially notify them of the plans. Wilner could not be reached for comment as of press time. And when The Courier contacted Samaritan Village, which operates multiple shelters around the city, the group said that it would not comment as the proposal is still being reviewed.

The nonprofit said it plans to insert 125 families in the building and it will have security.

Community members are worried that adding that number of people in the neighborhood would inundate already overcrowded schools.

Residents also believe that Glendale isn’t a good fit for the shelter, because transportation is limited since there are no subway lines.

The factory, which used to manufacture plane parts, is contaminated, according to multiple sources, and the building would need millions in tax dollars to repair.

So instead of a homeless shelter, residents said they would prefer to see a school, a park for local kids or a senior center for the many elderly in the area.

“I’m looking for something that I’d feel is appropriate, but I have to look upstate. So we need something in our neighborhood.”

They aren’t completely sure what the site should become, but there is a unified belief that a homeless shelter will damage the community so they don’t want it.