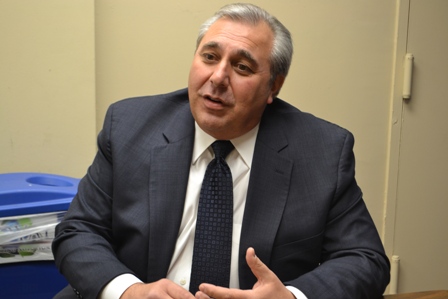 Aurelio “Tony” Arcabascio, Republican candidate for Borough President, said he has been painted as a Republican “one percenter” throughout his campaign.

“I drive a Honda, my parents are immigrants. Who is this one percent you’re talking about,” he asked.

Arcabascio, a project manager for North Shore-LIJ Health System, will face off against Melinda Katz on Tuesday, November 5.

Over the months leading up to the general election, Arcabascio has been going to community board meetings, civic meetings and more.

“You have to talk to people. You have to let them know who you are and that you’re not just a name on the ballot,” he said.

Although he does not have political experience, he said his small business background, healthcare work, management experience and knowledge of his would-be constituents create a recipe for success.

Arcabascio talked to The Courier about many current, pressing issues in the borough. Regarding education, he said he is against co-locations, not a fan of charter schools and an advocate for building new schools.

School and neighborhood safety were also a concern. Arcabascio mentioned P.S. 232 in Lindenwood, and said speed bumps need to be put in around the school’s busy area.

He also hopes to revamp health care in the borough, and believes his experience at North Shore-LIJ will help him do so. For his staff, if elected, he would hope to appoint a Democrat as his Deputy Borough President.

For small businesses, he hopes to provide incentives for them to survive the fated first year, such as using Borough Hall to expedite city permits and applications.

“If we don’t get businesses open, they don’t hire people, they don’t get sales, we don’t collect taxes,” he said. “It’s a vicious cycle. Our job is to make them survive.”

He is for a soccer stadium in the borough, but not in Flushing Meadows- Corona Park. He also pledged to “work four years” to eliminate the toll going into the Rockaways.

“We need a change in this office,” he said. “Unfortunately, when you look at it, it’s been 20 years of malaise in Queens.”