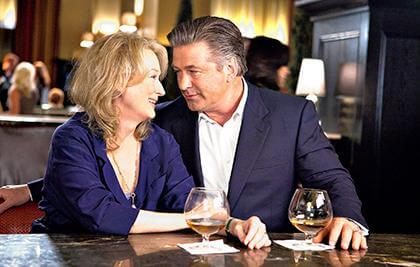 Millions of people across the country caught a glimpse of St. John’s University on the big screen last weekend.

School officials announced last week that shots of the school’s Queens campus were featured in the film “It’s Complicated,” which hit theaters Christmas Day. The film with an all-star cast, including Meryl Streep, Alec Baldwin and Steve Martin, brought in $22.1 million at 2,887 screens across the country over the long holiday weekend and ranked fourth at the box office.

The movie centers around a love affair between Streep’s and Baldwin’s characters, Jane and Jake, who are divorced, and a relationship between Jane and Adam, played by Martin.

“Staging, pomp and circumstance were in place as St. John’s great lawn was transformed into two days of moving-making, complete with camera crane operators, hair, makeup and wardrobe tents and star trailers lined up three-deep inside the campus walls,” St. John’s said in a statement. “The Hollywood buzz swept throughout the Queens campus as several onlookers from the university community witnessed the historic event take place around the perimeter of the movie set.”

The St. John’s Queens campus in Fresh Meadows was the setting for the two-day movie shoot this spring, during which Universal Studios filmed the university’s graduation ceremony May 17. The footage was used for a scene in which the characters played by Streep and Baldwin rekindle their relationship while attending their son’s graduation.

While Streep and Baldwin were not at the college during the graduation, they did appear at St. John’s the following day, during which a commencement ceremony was recreated with 1,000 extras, including some St. John’s students, administrators and staff.

John Krasinksi, who stars in the television series “The Office,” was also at the university that day for filming. Krasinksi plays the son of Streep and Baldwin in the movie directed by Nancy Meyers, who is known for directing such films as “Something’s Gotta Give” and “What Women Want.”

Queens has been the darling of movie makers as of late. The movie “Henry’s Crime” starring Keanu Reeves was filmed in Forest Hills this month and Our Lady of Mercy School in Forest Hills played host to a bevy of stars, including Ron Eldard of “ER” and Jill Hennessy of “Crossing Jordan,” while they were filming “Roadie” in Queens during October and November.

It was the second time that the school had rented out space to the movie industry after individuals involved in “The Rabbit Hole,” starring Nicole Kidman, used Our Lady of Mercy earlier this year.