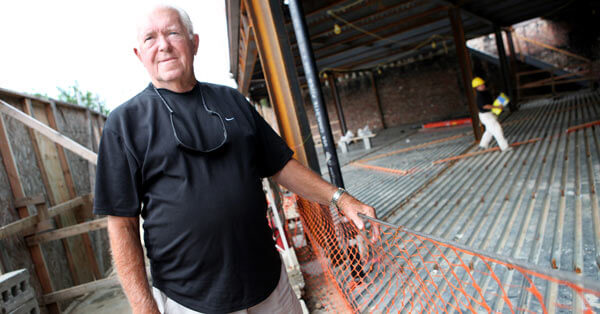 Sitting under a tent in a makeshift office outside his restaurant, George O’Neill still hears the sirens and alarms that awakened him on the morning of the fire.

“I had never seen anything like it,” said O’Neill, whose eponymous eatery, O’Neill’s, burned down in May 2011. “I was in a daze. I couldn’t believe my place was going up in flames.”

The five-alarm grease fire, which O’Neill said took firefighters more than two days to extinguish, started in the restaurant’s duct work, according to O’Neill. That night, O’Neill was renting a room across the street from the restaurant, making him one of the first on the scene.

But there was nothing he could do except stand outside with neighbors and watch the flames — wondering what to do next.

Nothing was saved in the fire that gutted the restaurant — nothing except for O’Neill’s resolve to reopen and get back to feeding his friends and neighbors in the tight-knit Maspeth community.

“The fire was on the 2nd and by the 6th I had plans in place to rebuild,” said O’Neill while touring the space where the restaurant will rise, and enthusiastically pointing to where diners will sit and where the bar will be reborn. “There was never a doubt in my mind that I would reopen the place. It’s my life and I was never going to give it up that easily.”

The Maspeth fixture, at 64-21 53rd St., has been in the family since 1928, when O’Neill’s father opened what was then called the Plateau Tavern. As years passed, O’Neill began buying up the property surrounding the watering hole: a grocery store, a barbershop, a liquor store, a cleaners, a bakery, a delicatessen.

Throughout the years, O’Neill’s hosted nearly every imaginable character at the bar, in the dining room and in the old catering space. From the championship New York Mets of the 1980s to neighborhood regulars, the restaurant was a beloved meeting place for decades.

And it is that intangible magic that the owner wants to recapture with the newly minted restaurant once it finally reopens in early December.

O’Neill’s plans to pack in even more new friends with an expanded catering room in the back of the restaurant. He said the space will hold around 300 to 350 patrons and will be available for every party imaginable.

The first big party in that room is already booked. On Dec. 7, O’Neill’s will host a benefit for the NYPD’s Widows and Orphans fund.

“That party is booked and it’s huge, so we better be ready to go by then,” he said.

Beyond big parties and special events, O’Neill is most excited for the everyday customer — the guys and girls that come in for chicken wings and football, the families looking for burgers and a night out, the weary traveller looking for a coffee and a place to sit.

“People are always asking me when we’re reopening,” he said. “I guess they miss it as much as I do.”