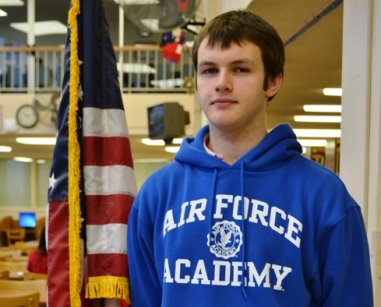 Seamus McCaffrey and Alan Mook have been accepted to the United States Air Force Academy. They are the only two in the borough who were given the elite nod this year.

“This is a dream come true,” said McCaffrey, 18, a senior at St. Francis Preparatory School. “It’s something surreal because I get to do what I want to do through serving my country. It’s a tremendous opportunity.”

McCaffrey, of Glendale, said he had his sights set on the skies since he was old enough to learn about planes.

“I’ve always wanted to be a pilot. Going to the Air Force was the only thing I really had in my mind,” he said. “I have a love for flight.”

The aspiring fighter pilot soared academically, with a cumulative 90 average, while leading as senior class president and playing on the school’s varsity football team. McCaffrey also serves as a sacristan at Sacred Heart Church in Glendale.

“He worked very hard for what he wanted. He put everything into it,” said his mom, Antoinette McCaffrey.

The trailblazer will be the first in his family to attend college, as well as enter the military, when he leaves for the Academy on June 26.

Meanwhile, Mook, 18, will be the second airman in his family. He joins his brother, Kevin, who is a junior at the Academy.

“It was all worth it,” said the College Point teen.

Mook, who graduated from Holy Cross High School last year, said his application was originally rejected by the Academy, but he was offered a scholarship to attend a prep school in New Mexico for one year. “When I was denied at first, it was very disappointing,” he said. “But I had another chance to get back in. I’m getting a degree from one of the best schools in the nation. Nothing beats that.”

Graduates of the free four-year program at the Colorado school agree to serve in the Air Force for at least five years.

Last year, three Queens students were given the green light by the Air Force Academy. McCaffrey and Mook beat out about 12,000 applicants this year, Academy officials said. Only about 1,200 get accepted annually.

“The candidates that have been getting in have been really reflecting the diversity of Queens, which is outstanding,” said Major Andrew Mattson, the academy’s Queens admissions liaison officer. “These are people taking on significant leadership roles. They are just great Americans.”