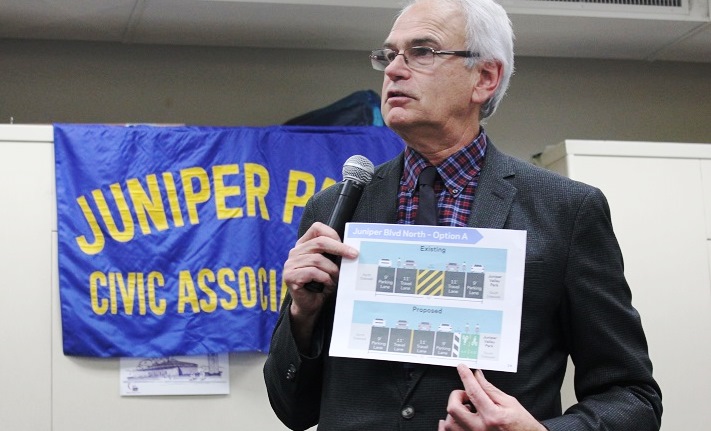 Members of the Juniper Park Civic Association (JPCA) voiced opposition over the Department of Transportation’s (DOT) plans for bike paths along Juniper Boulevard North at the group’s monthly meeting on Thursday night.

“These kinds of things are going to disrupt us for a while,” Holden said. “They’re trying to take neighborhoods that don’t really need or want bike lanes, and they’re trying to actually destroy that area around the park.”

According to Holden, the bicycle routes were originally requested by the Ridgewood Property Owners and Civic Association (RPOCA) back in 2011 in an effort to expand the existing bike route network in Ridgewood while providing cyclists with easier access to surrounding neighborhoods.

“It would be a traffic jam like Metropolitan Avenue, and we don’t want that,” Holden added.

The plan also drew outrage from JPCA members who expressed concern over traffic tie-ups and cyclists who disobey traffic laws. Phil Wong of the civic group Elmhurst United shared his own experiences driving next to similar bike lanes along Queens Boulevard.

“The cyclists that use the bike lanes don’t look at the traffic lights. They think the traffic light is not for them,” Wong said. “Vision Zero pays for these bike lanes, but it was slapped together in such a hurry that many of the details were not figured out.”

The second alternative, or Option B, would create two standard bike lanes on either side of the street similar to the ones recently installed along 80th Street. Under this plan, the current 12-foot-wide painted median at the center of Juniper Boulevard North would be reduced to a 4-foot-wide buffer so as to accommodate the new bike lanes.

When asked to choose between the two plans, JPCA members reluctantly voted for Option B during the meeting, despite vocalizing their desire to have no bike lanes surrounding the park.

“This plan, although it’s not great, is much better than Option A,” Holden explained. “We were told that we have to pick either Option A or B. We don’t really want bike lanes, but if the mayor is pushing it and we have to take it, then we’d rather take Option B.”

Holden believes that Community Board 5 members may be leaning in favor of Option A, but plans to fight the DOT should this version of the plan go into effect.

“If they try to throw this at us, we’ll go to court,” Holden argued. “We’re not going to let them do this.”