By Suzanne Monteverdi Posted on September 19, 2017 One local lawmaker’s protest over the construction of new bike lanes along Northern Boulevard in Bayside and Douglaston on Monday took a turn when a group of counter-protesters showed up to offer their very vocal support of the plan.

State Senator Tony Avella organized the rally outside of the Alley Pond Golf Center on Sept. 18 to give him and others the opportunity to blast the NYC Department of Transportation’s (DOT) upcoming implementation of a bike lane along Northern Boulevard. DOT has already begun to work on the project.

But the rally also drew the attention of about two dozen individuals from Transportation Alternatives. The organization has been vocally in favor of the DOT plan since it was first presented to the community at the Community Board 11 meeting in June, where it received board approval with a narrow vote.

After further consideration, the community board revisited the city’s proposal at an emergency meeting called by the board’s Transportation Committee in July. Committee co-chairperson Bernard Haber, a retired engineer, presented the board with his own set of revised plans. Instead of having the lanes in the street, Haber proposed, cyclists and pedestrians could share a widened sidewalk, eliminating the need for one westbound lane of traffic to be taken away. The group sent the plans to DOT for inspection.

On Sept. 11, Haber presented his proposal to the full community board and DOT officials, who said his alternate plan could run up to $10 million and take years to complete. Haber said his plan would provide more safety for bikers and would only cost about $600,000.

At the Sept. 18 rally, Avella was critical of DOT’s decision to move forward with the project and urged the city agency to consider implementing Haber’s plan.

“There’s been a lot of controversy about this plan,” Avella said. “The community board believes, and so do I, that it’s actually safer to have [cyclists] on the extended sidewalk in this stretch rather than cutting off a lane of traffic.”

He also pointed out that motorists would have to cross through the proposed bike lane to enter and exit local businesses and the highway, putting cyclists at risk.

“Nobody’s against the bike lane; we just want to do it in the right way, the safest way,” Avella said. “Isn’t it more important to be safer than rush something through? … That’s not democracy.”

The press conference was going to take place inside of the golf center until advocates with Transportation Alternatives complained that the venue did not allow for their participation. After a heated back and forth, the state senator — who was joined by representatives from the Douglas Manor Association and Douglaston Homeowners Association — agreed to move the rally outside under the condition that they not call out during his remarks. 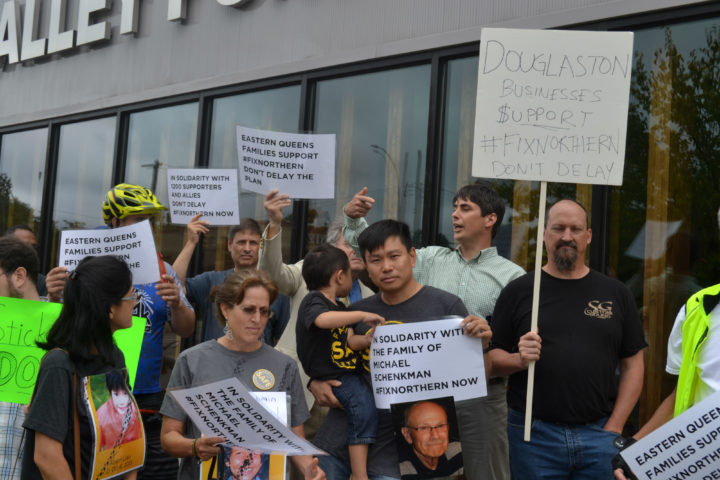 “These are their bullying tactics,” Avella said of the group. “They don’t want to have an open discussion.”

The state senator said most of the advocates in attendance to counter his argument were not local residents and would not be directly impacted by the issue.

Ben Turner, Transportation Committee co-chairperson, told reporters that the board gave DOT clearance to implement the plan with their original vote and said that the bike lane is only part of the larger plan to make Northern Boulevard safer for all — including motorists.

“[The roadway] is too wide open; it encourages speeding,” Turner said. “Part of the purpose of the DOT’s plan is to reduce speeding by removing excess road capacity … That’s the point that’s been lost in all of this debate.”

Eric Harold, a member of Transportation Alternatives and a Whitestone resident, said there is an immediate need for the bike lanes and revisions can be made in future years, if deemed necessary.

“Right now, the DOT’s plan can immediately impact the safety of cyclists and pedestrians,” he said. “It can be done in a week.”

A DOT spokesperson said the city agency is “open to continuing the discussion” about the community board’s concept.

“However, DOT’s plan, which incorporated much of the board’s previous feedback and received a vote of support this summer, allows the agency to immediately deliver critical safety benefits for the community and all street users,” the spokesperson continued. “Implementing the two-way protected bike lane on the north side of Northern Boulevard adds vital traffic calming along this Vision Zero priority corridor while creating a safer route for pedestrians and cyclists traveling between Bayside and Douglaston.”

DOT has received letters of support from several community groups in favor of the project, including the Douglaston Local Development Corp., the Douglaston Village Chamber of Commerce, and the Westmoreland Association, the spokesperson also said.

The call for safety improvements at the location was spurred by the death of 78-year-old Michael Schenkman, who was struck and killed by a car while riding his bicycle on Northern Boulevard to access the nearby Joe Michaels Mile bike path.