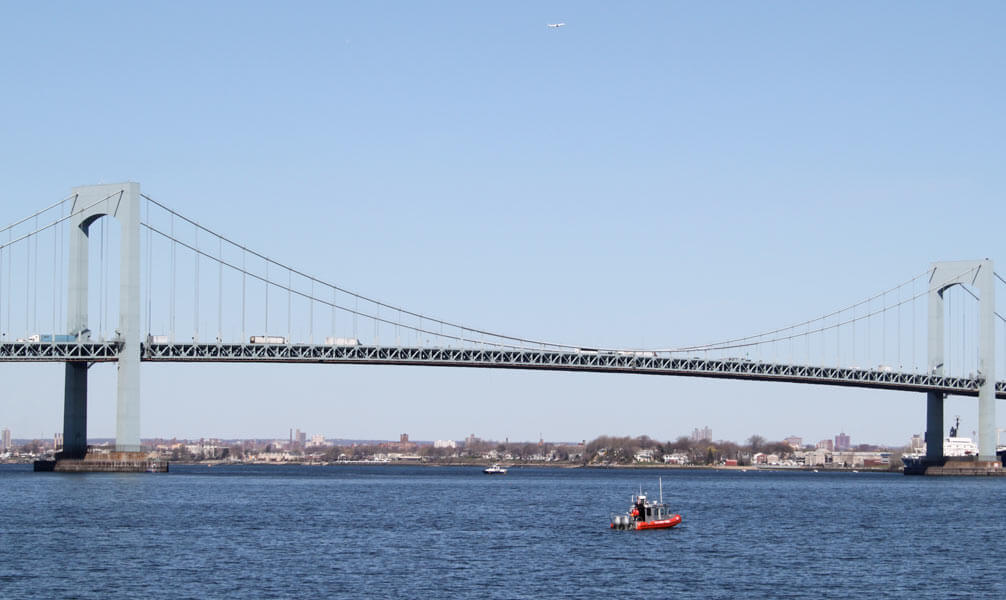 A 35-year-old subcontractor working on the Throgs Neck Bridge Friday fell off a platform below the roadway and into the water, authorities said.

Members of the NYPD, FDNY and U.S. Coast Guard, among others, searched for the worker throughout the morning. At 12:30 p.m., the MTA said in a statement that finding the subcontractor was now considered a recovery mission, meaning that the man was thought to be dead.

“MTA Bridges and Tunnels extends its condolences to the worker’s family, friends and co-workers,” the agency said.

MTA said the man, who was employed with subcontractor Nuco Painting Corp. of Islandia, N.Y., had been working in the middle of the bridge’s span, which runs from Bay Terrace to Throggs Neck in the Bronx, before he slipped off the platform after 8 a.m.

Police said the man was 35 years old, although a name had not been released as of Friday afternoon because the family had not yet been notified.

The Coast Guard said it sent out two boat crews from Kings Point, N.Y., and a helicopter crew from Atlantic City, N.J.

FDNY was on the scene from about 8:30 a.m. to 11 a.m., when they closed down their operations, a spokesman said.

The MTA said the man was working on part of a $25 million, two-year rehabilitation of the bridge’s structural steel. The contractor on the project was Elsol Contracting & Construction, which has multiple locations throughout Queens, the MTA said.

The agency said all workers are required to wear safety harnesses, and the circumstances as to why the man fell were under investigation by the Bridges and Tunnels’ Health and Safety division, the U.S. Occupation Safety and Health Administration, the city’s Office of Emergency Management and the NYPD.