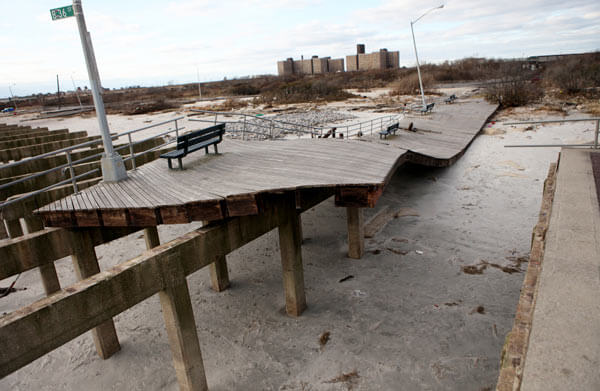 The first phase of a Rockaway Beach sand replenishment project will begin this week, officials said.

The $10 million project, funded by the U.S. Army Corps of Engineers, will pump 600,000 cubic yards of sand into the beach to restore the shoreline to pre-Hurricane Sandy levels. Large sections of the boardwalk were destroyed.

Later in the summer, the contract for the second phase of the project will be awarded, which will place more than 3 million cubic yards of sand along Beach 19th to Beach 149th streets, officials said.

“Soon Rockaway’s beaches will be well on their way to being rebuilt and protected against future storms,” Schumer said in a statement. “This project, and the contract to be awarded later this summer, will fortify the beaches and make them less vulnerable to future storms and flooding.”

Both phases comprise the Rockaway Beach Protection Project. The project was included in the Sandy Relief Bill passed by Congress and signed by President Obama in January.

“The beaches in Rockaway are crucial for the safety and longterm recovery of our community and economy, especially after the severe damage caused by Superstorm Sandy,” state Assemblyman Phillip Goldfeder (D-Rockaway Beach) said. “For months, we have rallied, screamed and petitioned to demand more sand for our beaches, and finally, with help of Sen. Schumer, Friends of Rockaway Beach and local residents, our voices were finally heard and we can ensure the future and safety of our community.”

The city is also working to install TrapBags, sand-filled geotextile structures, along the shoreline to provide flood protection. Each TrapBag is 100 feet long and weighs 189,000 pounds, Zachary Feder, a spokesman for the city Parks Department, said.

When the pieces are joined together, they become a monolithic barrier.

Feder said the TrapBags will be covered in sand by the Army Corps project, making the installation the core of a sand dune.

The TrapBags will run from Beach 55th to Beach 149th streets.

Not only are government agencies working to protect the beach, but locals are, too.

On Saturday, Barefoot Wine and the Surfrider Foundation will join together for a beach restoration and cleanup project. Blaine Rueber, a spokesman for Barefoot Wine, said volunteers will be using old Christmas trees to create sand dunes. The trees were provided by the city, and volunteers will lay them across the beach. Rueber said over time the trees will collect sand and become natural barriers to help protect the shoreline.

This is the fourth time the two groups have organized volunteers to help clean up Rockaway. Last year there were more than 200 participants, he said.

The restoration project will be held from 11 a.m. to 2 p.m. Volunteers should meet at the 44th Street A train stop.

Afterward, there will be a celebration featuring Barefoot Wine, surf-inspired fare and a live musical performance by rock artist Ryan Star, a Long Island native. It will be held at 183 Beach 96th St.

Rueber said there will be complimentary shuttles to the Rockaway Peninsula from Manhattan. To RSVP to volunteer, visit beachrescue2013.com. To RSVP for a shuttle bus, e-mail Rueber at [email protected].