Street Talk: Who has the better chance of winning this year’s Stanley Cup — the Rangers or the Islanders? “The Islanders. I just like them a little bit better.”
Ralph Rocco “Islanders all the way. It’s not even a question. This is the last year they’re playing at the Coliseum so there is going to be some magic.”
Alex Lettieri 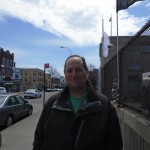 “Definitely the Rangers because they are a far better team and they are my favorite team.”
Bill Stanton “Neither. They’re both not very good. I guess I would go with the Rangers.”
Dave Smith “I don’t want to answer that question because I’m going to say the Rangers just because the Rangers had a better season. I obviously want to the Islanders to win.”
Alex Golematis