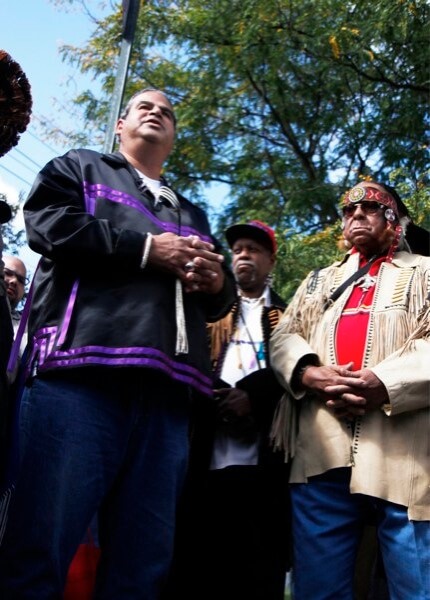 Donna Gentle Spirit Barron, a Matinecock/Montaukett Indian who is the published author of five books about the life of her Matinecock ancestors of Little Neck and the family historian of her people. She continues to fight for the truth to be told and to keep her family’s heritage alive.

Barron will take part in a panel discussion July 26 from 6 p.m. to 8 p.m. at Flushing Town Hall’s free event, Honoring the First People of Queens, with descendants of the Matinecock tribe of Queens and Long Island. The members will explore the tribe’s history, culture, and customs, focusing on best practices in acknowledging Matinecock tribal territories, and tools to help the tribe build relationships with local organizations and government.

The Matinecock are Algonquin people who speak both Munsee and Costal Algonquin. They were the first inhabitants of Flushing and the surrounding area before the Dutch and English settled there in the 1640s and 1650s. Their North Shore lands stretched from what is today College Point to their hunting and fishing grounds in Smithtown, L.I.. In 1656, English Colonist Thomas Hisks and his armed men seized the last Matinecock settlement, a fishing village in Little Neck. There are Matinecocks who continue to live on their ancestral land in Little Neck and other parts of Queens and Long Island.

Barron, who was born in Flushing, now lives with her father in Little Neck, where her ancestors have been living since 1636. Today, there are now only three original Native American families on the land.

“I want people to know that we’re still here, strong, a people, and we’re fighting to keep our history alive” said Barron. “Unlike the Zion Church where they did the reburying of the body, they put a stone that says the last of the Matinecock and that’s not a true statement.”

Barron’s late great great uncle, Chief James Wild Pildjen Waters, died in 1927 while leading the fight to save their ancestral burial ground from being removed for the widening of Northern Boulevard. They lost the fight in 1931, and the remains of Matinecock ancestors were removed and placed into a mass grave at the cemetery of the Zion Episcopal Church on the Douglaston Parkway.

“I found out that a lot of the longtime residents of Little Neck didn’t even know know of the Native presence that was here,” Barron said. “The Native presence in Little Neck was disappearing, and it was important to acknowledge…and that’s why I wrote my books and went out lecturing the children to remind the community of what was once here.”

Barron has lectured at the historical societies of Flushing, Bayside, Little Neck, Douglaston, and Floral Park, and the Little Neck Library and the Central Library in Jamaica. She presented a talk in Boston with special guests from the Lowell Indian tribe.She has also shared beading and storytelling events with children at Bayside’s Fort Totten and the Alley Pond Environmental Center in Little Neck.

Barron will be joined by three other panelists at Flushing Town Hall:

Tecumseh Ceaser, a Native American jewelry artist and cultural consultant, who is of the Matinecock Turkey clan, Wamponowag Pokanaoket band, Montauket, and Blackfoot descent. Tecumseh is currently the North American Focal Point for the Global Indigenous Youth Caucus at the United Nations, where he advocates for indigenous Americans’ rights to member states, NGOs, and other indigenous nations. He has also provided cultural education to universities, museums, and institutions including the Queens Public Library, Socrates Sculpture Park, the Poppenhusen Institute, and Alfred University.

Harry Wallace, chief of the Unkechaug Indian Nation since 1994, is a licensed attorney in New York state. The Unkechaug people live on the Poospatuck Reservation on Long Island. Wallace is also a New York representative of Native American Graves Protection and Repatriation Act and has many leadership roles advocating for natives’ rights, language, and sovereignty.

Chief Reggie Dances With Medicine Ceaser, Sagamore of the Matinnecock Turkey Clan, are descendents of the Waters Hegeman family.

His great uncle is Walter Robert Deer Foot Hegeman, Sagamore, of the Matinnecock Turkey clan. He also is a descendent of Chief John Standing Waters and Chief James Wild Pildjen, who were chiefs of both the Matinecock and Montaukett. Chief Reggie has lectured at universities and historical organizations and is a well-respected member of his community.

“This event will be particularly illuminating to individuals and organizations based in Queens or Long Island, or those who simply have an interest in Native American history and customs,” said Gabrielle Hamilton, Flushing Town Hall’s director of Education & Public Programs who will moderate the panel.