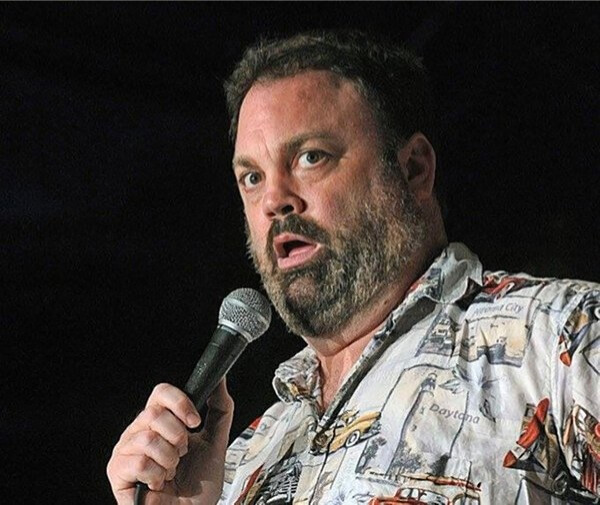 Okay, it may sound corny and clichéd, but laughter is the best medicine, especially in these increasingly strange and politically divided, Twitter-obsessed times.

It’s a known fact that laughing out loud — like when you’re at a comedy show or watching your favorite sitcom — is great for your health. No kidding. And did you know that a good belly laugh creates positive physical changes in your body and brain?

In fact, laughter makes you happier and acts like a natural anti-depressant, increasing dopamine levels in the brain; it helps people connect more positively to each other; improves marriages, and so much more. And folks who laugh often are considered sexier by others.

So, if watching a really funny comedy act or sitcom is akin to therapy, maybe comedians should be called “laugh therapists?”

From his still active career in stand-up, performing locally and across the United States, to landing a recurring role as loveable Mott on CBS’ recently cancelled “Kevin Can Wait,” where he starred opposite Kevin James and Leah Remini, you can say that 6’6” actor/comedian — and “laugh therapist” — Chris Roach, has in his own way, made other people’s lives happier, eliciting a healthy dose of laughs from his stage and TV audiences during his wide-ranging career. He may have even unknowingly contributed to the betterment of their overall health.

The Queens native and longtime Long Island resident, who calls Ronkonkoma home, has brought his unique and self-deprecating sense of humor to some of the biggest and well-known stages, including as The Borgata in Atlantic City, as well as appearing in numerous episodes of both comedies and dramas.

This rising star has been bringing side-splitting comedy to the masses since first appearing in film and television. From Comedy Central to “The Michael J. Fox Show,” “Limitless,” The Onion Sports Network, and a recurring role as Rodney the loveable mental patient on ABC’s “One Life to Live,” he has used jokes and humor as “healing tools,” and one can only assume that his comedy continues to elevate his audiences’ dopamine levels.

As a beloved member of his Long Island community, the entertainer was recently recognized for his talents and work with a “Rising Star” award at the 21st Annual Long Island International Film Expo (LIIFE) by The Long Island Film/TV Foundation at Bellmore Movies.

Following “Kevin Can Wait,” Roach has remained in the spotlight, appearing on United Stations Radio, SiriusXM with Jim Breuer and his fellow castmates, as well as several media outlets, where he has talked about his stint as a NYPD officer and everything from his love for hockey to the trials and tribulations of being very tall and how he got his big break.

“I lived in Glen Oaks until I was almost seven. I have a lot of very special memories,” Roach said. “There were a few moments where I was able to make my parents laugh when they were about to smack me for aggravating them. Being funny can come in handy at times.

“We used to live right behind Mays on Union Turnpike. I remember a diner in that shopping center that would deliver your food to you [on the counter] by a toy train. There was a movie theater and bowling alley in there too.”

Though he calls Ronkonkoma, L.I., home, Roach hopes to have a place in the city one day.

The entertainer also talked about his former short-lived NYPD career and his love of hockey and the Rangers.

“Although my father, two brothers and sister loved being police officers, it was not for me,” he said. “I worked in Queens in the late ‘90s. I hated writing people tickets because I was struggling and knew how it felt to receive one. But I made a lot of good friends though and had some laughs,” he said.

Roach said he’s been a Rangers fan since he was eight years old, despite all the Islanders fans around.

“Growing up a Ranger fan in New York Islander country was not easy as a kid,” he said. “Especially during their four-championship run. Whenever the Rangers are in the playoffs my life as I know it is on hold.”

Roach also shared a couple memorable moments from his career, including his big break.

“I was performing my stand-up on a quiet Wednesday night at McGuire’s Comedy Club on Long Island (Bohemia) when Kevin James walked in and saw me and ultimately cast me on his show as his good friend, Mott,” he said.

James became a mentor for Roach, who said he learned a lot from the comedy legend.

“Working with Kevin was surreal. He took me under his wing right away. I learned a lot from him as an actor, and also as a comedian, opening up for him in theaters across the country,” Roach said. “I’m very blessed. I made friends for life working on that show. I miss them already.”

He highlighted another special moment “that was really cool,” when he got perform a scene in an independent film with Al Pacino.

In his spare time, the warm-hearted comedian enjoys coaching youth hockey as well as hanging out with family and friends. A big believer in giving back, Roach often hosts charity events, where he shares his comedy. Between gigs, he also spends a lot of time writing comedy and enjoys playing his guitar in an original hard rock band called Ridgehaven.

Like many stand-up comics, Roach — whose favorite comedy spots include Governors Comedy Clubs on Long Island as well as Gotham and The Comic Strip in the city — just likes to joke about humorous, everyday stuff that people can relate to, and talks about his family and things that he finds funny. He says he would have loved to have met both of his comedy influences, Jackie Gleason and Rodney Dangerfield. But meeting and connecting with his audiences are just as important.

Roach is heading to The Brokerage in Bellemore, L.I., where you can catch his act Aug. 17 and 18.