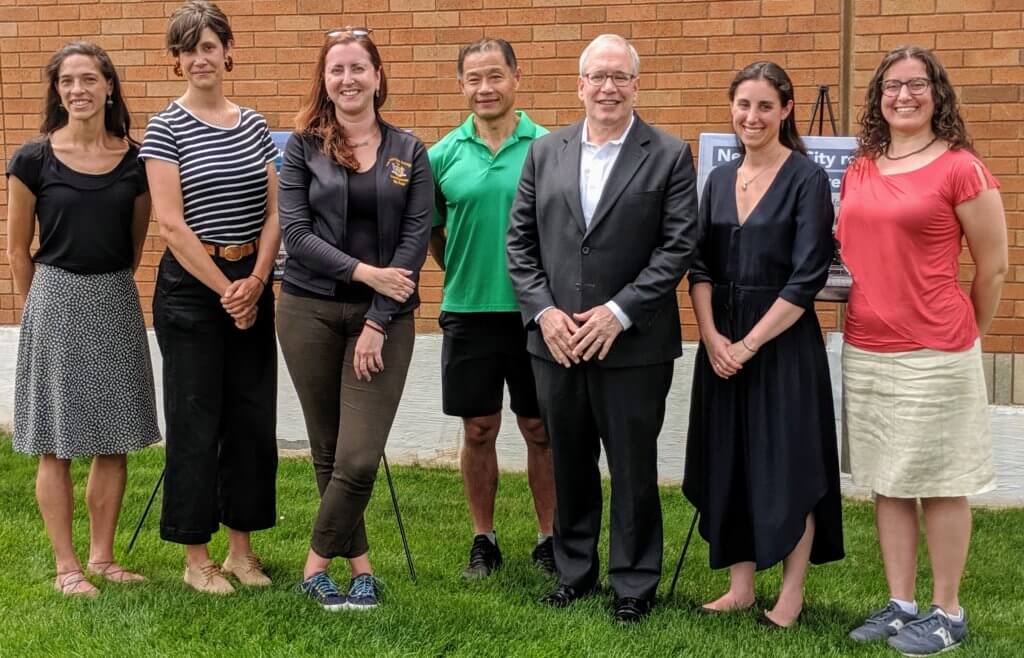 Lawmakers celebrated in Flushing on Monday newly signed legislation that aims to increase green roof installation across the city.

The new law would reform and modernize the city’s green roof tax abatement by dramatically increasing a tax break for property owners choosing to install a green roof in neighborhoods that lack green space and struggle with regular sewer overflow.

“New York City should be at the forefront of urban sustainability and green innovation, and our barren roofs offer an ideal opportunity to improve air quality, reduce energy use, ease storm-related flooding, and increase the amount of green spaces in communities that need it the most,” said Stringer. “This bill is just the start. It’s time we used the 62 square miles of available space on top of our buildings to truly create a green oasis in the skies in every corner of the city.”

Stringer and Danielle Spiegel-Field, a professor at New York University Law School, issued a proposal in 2018 that would reauthorize the citywide green roof tax credit and provide an extra $15 per square foot credit to are lacking green space.

Currently, green roofs cover only one in 1,000 buildings across the five boroughs and it is estimated that every dollar invested in green roofs generates $2 in benefits by mitigating stormwater runoff and providing green spaces.

“The aggressive measures contained in the climate protection law we passed last month ensures that New York leads the way in keeping our planet inhabitable,” said Liu. “This green roof bill incentivizes individual homeowners to contribute meaningfully to that global effort and significantly reduce our local emissions. We are grateful to Assembly member Rozic and Comptroller Stringer for their leadership in this critical matter.”

Only seven roofs received an abatement during the decade-long run of the existing tax abatement program from 2009. Property owners saw little incentive to installing green roofs due to the dismal tax abatement and “broadly unrealistic regulatory standards.”

Buildings eligible for the tax credit under the current law require a green roof that covers “at least 50 percent of a building’s useable rooftop space, with vegetation on at least 80 percent of that covered roof space.”

The new bill reforms the 2009 program by scaling up the tax abatement and incentivizing the construction of green roofs in areas most in need of green spaces.

Under the new law, the city will select priority areas for the newly enhanced credit on a rolling basis.

“Renewing the City’s Green Roof Tax Abatement Program was integral to investing in green infrastructure programs and addressing the realities of climate change in our communities – particularly in our most vulnerable neighborhoods,” said Rozic. “I thank Governor Cuomo for signing this legislation into law and will continue working with Senator Liu and environmental advocates to expand this benefit even further.”