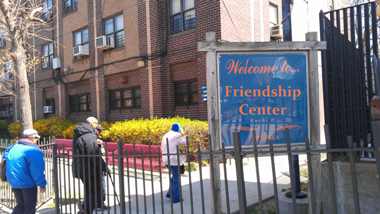 Some seniors in southeast Queens may soon lose their “friends.”

The Friendship Center — a program under the Jamaica Service Program for Older Adults (JSPOA) — relies heavily on funding from the Department of Health and Mental Hygiene (DOHMH) to support its rehabilitative programs. However, due to fiscal constraints, the agency said it could no longer support the program after July 1.

“It’s devastating. I just can’t even believe that they did this,” said Beverly Collier, executive director of JSPOA.

The Jamaica-based senior center offers free services to mentally and physically frail elders, who commonly suffer from Alzheimer’s disease, dementia and depression. In addition to providing meals and socialization activities, the center hosts psychiatric clinics once a week. Friendship’s mental health programs originally received $443,000 annually from the DOHMH, Collier said, but funds were cut in half last year. While the other half was restored through community support and discretionary funds, Collier said rallying to raise 100 percent of funding this year would be near impossible.

“It would be very difficult to maintain Friendship for this population without the department’s money. And sending this population to your average run-of-the-mill center is not an alternative because they are not able to participate and socialize with mainstream seniors,” Collier said.

The center — which has been in existence since 1979 — is home to the 65 to 75 seniors who use the center daily, according to the executive director.

The decision to strip the center’s funding has devastated caregivers like Brenda Lacey, whose 93-year-old mother has been going to the center for close to 14 years.

“This has been our lifeline. This is [my mother’s] livelihood,” Lacey said. “I feel terrible because this might be my mother’s demise. For her not to have those people in her life, it would be like losing a family member for her.”

Lacey said she plans to look into other mainstream regular senior centers, but fears her mother will not adjust well to the changes.

“She might not be able to cope. The people wouldn’t understand her like they do at Friendship,” she said. “I’m just praying. It really needs to stay open.”

Eleanor Williams said she’s nervous her 73-year-old husband, Harold, may revert back to depression if the center closes.

“Before Friendship, he was at the point where he was suicidal. He was at the hospital several times at months on end,” Williams said. “Once he got to Friendship, it really brought him totally out of his shell. If you had seen this man a year ago, you would say it wasn’t the same person. Right now, I don’t know where to go from here.”

Meanwhile, Councilmembers Leroy Comrie and Ruben Wills said they are “aggressively working” to make sure Friendship keeps its doors open.

“This program is something we should be duplicating throughout the city — not cutting,” said Wills, whose grandmother used the center before her passing. “I don’t know what it is with these budget cuts, but the city seems to always target the most vulnerable population. It’s going too far at this point.”

Wills said he will be posting an online petition on his web site — www.rubenwills.com — later this week in addition to targeting different ways to secure funding.