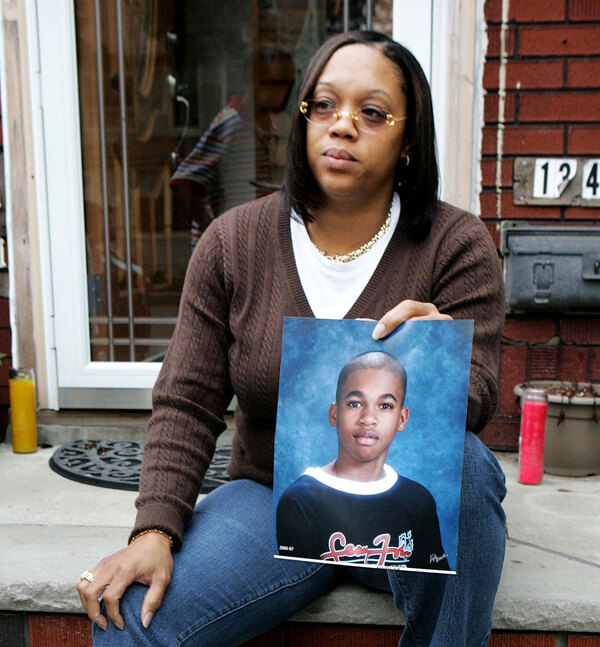 Shenee Johnson, an anti-gun activist who lost her son to a shooter, said she hoped the conviction of two notorious Crips street gang members for the 2009 killing of a 13-year-old Jamaica boy would bring his mother, Donna Hood, peace and warn others against pulling the trigger.

“I’m happy for her. I feel like she can get closure,” Johnson said.

Gregory Calas, 21, of 228th Street and 145th Avenue in St. Albans, and Nnonso Ekwegbalu, 19, of 183rd Street and 141st Avenue in Springfield Gardens, who are both Crips, were found guilty of killing Kevin Miller Jr. after a six-week trial presided over by Queens Supreme Court Justice Gregory Lasak, the DA said.

Hood said she was relieved at the verdict. The case was difficult to bring to trial, as many of the youths involved in the incident were afraid to come forward and put their lives in jeopardy.

“I feel like, rightfully, justice was served,” she said.

Calas and Ekwegbalu had been involved in a physical fight with the Bloods Oct. 2, 2009 outside Campus Magnet HS in Cambria Heights, at around 3:15 p.m., the DA said. Calas had fired his .380-caliber, semi-automatic revolver and Ekwegbalu had fired another gun at three unarmed Blood members he had been fighting as they tried to run away in front of a car wash at Linden and Springfield boulevards, the DA said.

One of their bullets ended up striking Kevin, who had been walking to a nearby McDonald’s, in the head and killing him instantly, the DA said. Another bullet hit 17-year-old Pedro Garcia in the left leg, the DA said. Garcia, who was working at the car wash, was treated at a Queens hospital, the DA said.

“The defendants in this case cut short the life of an innocent 13-year-old student and wounded a second teen who was working at a car wash by engaging in reckless — and ultimately fatal — gun violence,” Queens District Attorney Richard Brown said in a statement. “The streets of Queens County must not be turned into deadly battlegrounds for these rival gangs.”

Kevin, who like Garcia had no involvement in youth gangs, was a hardworking student and a member of many community groups.

After the death of her son, Hood started the KLM Jr. Foundation to improve the lives of youths in the community and award scholarships.

Calas and Ekwegbalu shared the same trial, but their cases were both considered by separate juries, which found each of them guilty, the DA said.

Calas and Ekwegbalu both face 50 years in prison at their sentencing, which will be held Jan. 9.

Johnson, whose son Kendrick Ali Morrow was fatally shot at a block party in 2010, said she hoped the conviction of Calas and Ekwegbalu would discourage other young men from picking up guns. She also said witnesses unwilling to speak up is common, which makes convictions more difficult.

“I understand the fear because who’s going to protect them?” Johnson said. “On the other hand, do the right thing.”

Hood said she has asked to speak at Calas and Ekwegbalu’s sentencing. She said she does not seek sympathy or even an apology from her son’s killers, but she wants them to have long sentences and to realize the impact of their crimes.

“I just want to be able to state how I feel,” Hood said.