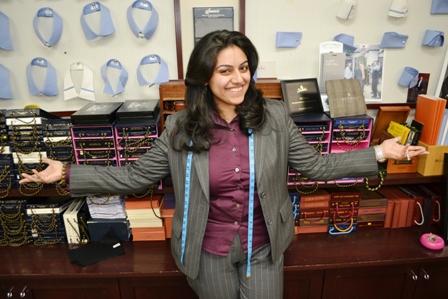 Today his 42-year-old Mohan’s Custom Tailors sits in One Grand Central across from the century-old train terminal, and he is recognized for making suits for former mayors Rudy Giuliani and Ed Koch, and for various basketball stars, including former Knicks star center Patrick Ewing.

It’s an American Dream come true story that involves learning the trade in Hong Kong and emigrating from India to America with just $200 in his pocket.

Ramchandani will step down as president soon after some recent trouble with the law, and the company will announce that his 26-year-old daughter — a Queens native and Forest Hills resident — Roma Ramchandani will take his place, bringing its own set of challenges. She will become a woman at the forefront of the male tailoring industry, which is still largely dominated by men. “I’m pretty confident, I’ve been part of this business for so long and I think I’ve overcome a lot of adversity already and I just keep charging forward,” Roma told The Courier in an exclusive interview. “Yeah, I’m nervous but at the same time I’m just really super excited. While this company is up and growing and successful there is just so much more I can still do with it.”

When Roma was a young girl, she often used to go to her father’s tailoring business and watch the employees mend men’s clothes.

It lit a fire in her. For as long as she could remember, she has had a passion for fashion — and making clothes. Overall, she is an art person. In her late teens, Roma, an alum of St. Francis Preparatory School, started working part-time in the shop.

Roma is a 2009 Adelphi University graduate with a communications degree and a focus on filmmaking. Her hobbies include making documentaries and collecting over-the-head headphones, which she sometimes uses to match with her suits.

Her extensive knowledge of tailoring is a result of tutelage under her father, but her main conflict will be leading the company as a female in a largely male industry.

Working at Mohan’s in the past, she has encountered some men — especially older ones — who are skeptical of her knowledge of male fashion and tailoring. But she feels she can use that as an advantage over competitors.

“I kind of like to think that I have some kind of special ingredient as a woman with a women’s perspective on fashion,” Roma said. “If they are not here with their wives or girlfriends and they are on their own, I have that perspective and I can steer them in the right direction.”

Mohan was sentenced in March to one year and one day in prison for tax evasion, but the company is still popular. And with a fabric selection of about 10,000 and numerous colors and accessories, Mohan’s can make just about any suit for anyone. Roma wants continue advancing the growth and clientele of the store, and she sees primetime commercials in Mohan’s future.

“I would love to see our billboard in Times Square,” Roma said. “I think it’s really important to dream big.”

Step 1: Talk with tailor about the uses for the suit and where you would wear it. With Mohan’s you can even bring in a picture of a celebrity’s suit for them to remake. However, first-time customers should come with an open mind.
Step 2: Style selection. View different fabrics, collars, cuffs and colors. First-timers should start with a solid blue or gray.
Step 3: In this step customers would have their measurements taken. Today a fitted, tapered English style is hot.
Step 4: Then there is customization. Mohan’s can add extra pockets, special monograms and buttons, just about anything.
Step 5: The final step is, of course, to wait for Mohan’s to make the suit. The company has a two-week turnaround.

In the evolution of fashion trends come and go. Here are two of Roma’s picks for those looking to stay up-to-date. Spread collars, such as what singer and actor Justin Timberlake has been recently seen with, are trending now.