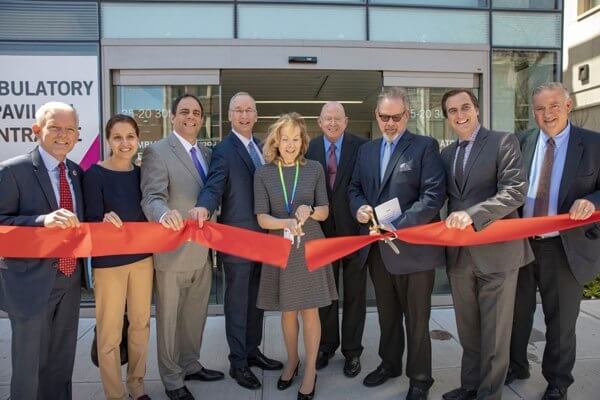 While half a dozen of the borough’s hospitals closed in the last decade, one was plotting its expansion.

Last week, Mount Sinai Queens celebrated the opening of its new $180 million ambulatory Pavilion in Astoria. Leaders of the Mount Sinai Health System joined elected officials and community leaders for a ribbon-cutting ceremony at the six-story, 140,000-square foot building that features an expanded emergency department, six new operating rooms and new outpatient services staffed with primary care physicians and medical and surgical specialists, all of whom are on the faculty of the Icahn School of Medicine at Mount Sinai in Manhattan.

“We are so proud of the high quality and depth and breadth of care we provide the Queens community. Providing care close to home and work is a key element of providing excellence in health care,” Mount Sinai Queens Executive Director Caryn A. Schwab said. “This effort to ensure accessible quality health care would not have been possible without the tremendous support from the leadership at Mount Sinai, our elected officials, and our community partners. I’m so grateful to everyone who made the Pavilion a reality.”

The building was constructed behind the original Astoria General Hospital at Crescent Street and 30th Avenue, which was taken over by Mount Sinai in 1999 and is now part of the city’s largest hospital system.

“With these stunning new facilities and state-of-the-art technology, the hospital is attracting top talent to further augment its excellent physician and nursing staff.”

Reich said doctors had already begun to perform more delicate procedures at the hospital, including the removal of a clot that saved the life of a patient who had suffered a debilitating stroke last October.

“This is the first time that delicate procedure was ever performed in Queens,” Reich said, “which is just one instance of the growing complexity of care and procedures performed at Mount Sinai Queens.”

City Councilman Costa Constantinides (D-Astoria) said everyone in the neighborhood, including himself, has a story about how their family was helped at Mount Sinai.

“The investments made by Mt. Sinai to expand our community hospital, like the beautiful new pavilion, are to be applauded and will go further to ensure we can expand great care here in Queens,” he said. “I have always been proud to work with the Queens Delegation to secure funding to further the important work at MSQ. I look forward to more generations of Astoria residents receiving the care they need from Mt. Sinai hospital.”

At the ground-breaking ceremony for the project in August 2013, state Assemblywoman Aravella Simotas (D-Astoria) spoke of how her father had suffered a heart attack years earlier and was told he had to recover in Manhattan, causing an enormous strain on her family.

“This is a wonderful thing for residents of western Queens,” she said. Not only can our community stay in our community to receive world class medical care, families will be able to comfort and visit their hospitalized loved ones without the burden of traveling into Manhattan.”

The project generated at least 460 construction-related jobs and added more than $175 million to the local economy. Approximately 175 staff have been added as a result of the building project.

“While hospitals are closing throughout the city, western Queens is lucky to have one that is growing and providing opportunities for the health-care coverage we need so we do not have to cross the river every time a loved one gets sick.”

Mount Sinai Queens also has the support of one of the neighborhood’s greatest economic engines. The entry to the pavilion was dedicated as the Kaufman Astoria Studios Entrance after George Kaufman, the late chairman of the film studio, donated $700,000 to the project.