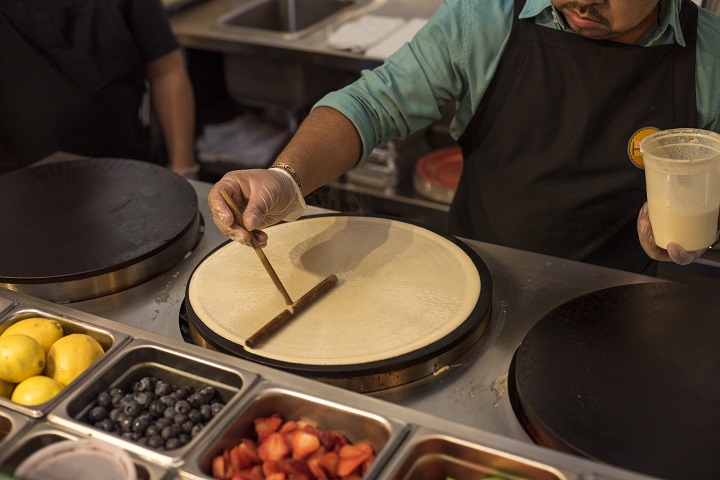 Parvez Eliaas, owner of Bonjour Crêpes and Wine on 30th Avenue in Astoria, can make that comparison with authority. After years of working under renowned chef Daniel Boulud, Parvez branched off to start his own venture two years ago. This Astoria location of Bonjour opened on Jan. 6.

To pick his cuisine, he didn’t hire a market research agency or spin the big wheel of food trends — he looked down at his own dinner plate. His wife cooks the best crêpe he’s ever had. “My wife’s family is in Hungary,” he said. “If we visit there for a month, 15 days are crêpes. We eat them for everything.”

And thus, Bonjour Crêpes and Wine was born. Being a man about to embark on a marriage journey myself, I pressed him for more: How does one balance savory and sweet? How important is starting with the right batter? Did you get a priest to bless the crêpes, or a Justice of the Peace?

Among other things — local ingredients, starting from scratch, and knowing your subject inside and out — for Eliaas, it all comes down to one key thing: “Everyone eats a crêpe with a knife and fork, but I want them to eat them the way they do in France, with their hands,” Eliaas said. “A knife and a fork ruins the balance of the flavors.”

Always eager to roll up my sleeves, that was all I needed to hear to dig in.

Our first savory crêpe came out right off the griddle and into our hands: chicken, pesto, tomato and spinach with gooey Gruyere spilling out the corners. The chicken had been slow-cooked in French butter with onion, salt, pepper and garlic, all in-house and with local ingredients. The pesto bounced off my tongue immediately and was wonderful alongside the tomatoes, which were just heated up enough to start being interesting without losing their texture. Next was a ham crêpe with more Gruyere and a house-made tomato sauce. While the ham may have been prepared from scratch in the Hungarian tradition, it tasted exactly how I remember big holiday hams growing up. Get ready to flash back to your earliest years. The Gruyere was also more prevalent here, hitting my taste buds right on the first bite. The final savory crêpe of the night was a gluten-free goat cheese crêpe made with buckwheat flour. I haven’t had much buckwheat before, but I can tell you that this flour was WORKING. There was definitely a different taste than what I’m used to — almost cinnamon-y, if I’m being honest — but it was delightful along with the goat cheese.

The sweet crêpes were up next, leading with a bacon offering. Bacon, of course, needs no introduction, but if you haven’t been introduced to Bacon’s after-hours alter ego, Dessert Bacon, then you need correct that fast. Dessert Bacon, here being regular bacon paired with a freshly melted bittersweet chocolate and juicy strawberries, will blow your mind straight out the back of your head. The sweetness and the savory playing around in my mouth alone earned Bonjour Crêpes another visit in the future. A crème fraîche crêpe with blueberries and strawberries followed shortly behind the bacon. While personally I’m not a big fan of crème fraîche, I could tell that this crêpe was doing what it set out to do very well. If you’re into crème fraîche, you’ll really enjoy the little pops of blueberry juice swirling in and amongst the tartness. It’s worth a trip. We had a quick buckwheat waffle next (bless whatever gods set the course of my life such that I could one day casually write that I had a “quick buckwheat waffle”), in which the buckwheat flour was far more pronounced. Here there wasn’t only that dark, interesting cinnamon-esque flavor, but there were also loads of textural notes at play: crunchy on the outside, but with an airy, soft interior. We had it straight with butter and syrup, no toppings, before moving onto what was, arguably, the raison d’être of my trip to a crêpe spot to begin with: I had heard of a crêpe suzette before, of course. I knew it was a luxurious French delicacy that was wildly over-indulgent, as only the French know how to do, but I hadn’t really had any firsthand experience with them until my night at Bonjour Crêpes.

They put butter, fresh-squeezed orange juice, and orange zest in a pan, lay the folded crepe in on top, douse it all in Grand Marnier, and then they light it on fire. Prior to eating it, Parvez told me it was a “mouthful of yumminess,” but if I’m being honest, he was underselling it. This was a citrus and butter combo that transcended space-time and brought me to a higher plane of existence. This was dough soaked in orange juice and liqueur set ablaze — “yumminess” does this dish a disservice.

To help you understand how good this crêpe suzette was, I need to walk you through a bit of writer housekeeping first. Most of the time, I try to write these articles as soon as possible after I go to the restaurant, to keep as many of the experiences and tastes in my head as I can. Of course, I take as many notes as possible, but the human brain is such that after some time, even the best experience fades into the background to make room for new ones. For personal reasons, I’m writing this part of the review about a week after my eating experience. During that time, I’ve been back and forth to Jersey about four times, argued with painters about how many variations of “white” I want them to paint my walls with (one), and seen multiple branches of my family during a big move. But even after all that time and through all of those experiences…

Unless it’s on fire.