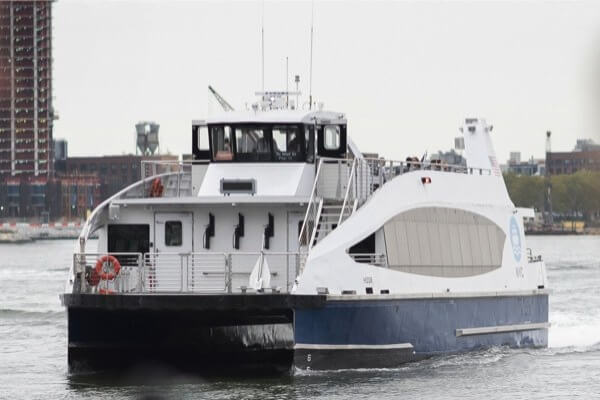 Ferry service has returned to Astoria for the first time in more than 80 years. NYC Ferry launched its Astoria route Tuesday morning from its landing on Hallets Cove with stops at Long Island City and Roosevelt Island, Midtown Manhattan and Wall Street.

Residents of the Astoria Houses will be able to reach East 34th Street in just 29 minutes, cutting commuting times by nearly half and costing the same as a subway ride at $2.75.

“I’m excited to join our community for this inaugural ferry ride along the Astoria route,” Constantinides said. “After years of advocacy and planning with the neighborhood, we’re happy to open this new route. The NYC Ferry system expands public transit options for western Astoria residents and will help revitalize Hallets Peninsula.”

The route also adds a second ferry landing in Long Island City, at the north end of Gantry Plaza State Park, bringing relief for riders of the beleaguered No. 7 subway line.

“The new Astoria ferry route will be life-changing for the people of western Queens, cutting travel time in half for many public housing residents and those living along the East River in Long Island City and Astoria,” City Councilman Jimmy Van Bramer (D-Sunnyside) said. “I hear every day from my constituents of the need for reliable transportation options to get to work, school, and other appointments on time. Starting today, this new ferry route will bring a faster, smoother commute, and I’m thrilled to join my constituents today for the inaugural ride.”

The route also stops at Roosevelt Island where the new Cornell Tech campus will officially open Sept. 13. Cornell Tech committed $2.5 million to support the NYC Ferry service to the island.

“The new ferry will provide another seamless connection for island residents, students, faculty, staff and the companies at The Bridge, and visitors to travel seamlessly between Roosevelt Island, Manhattan, and the growing tech community in western Queens,” Cornell Tech Senior Director of External Relations Meghan French said. “The Cornell Tech campus is all about openness and collaboration, and we can’t wait to welcome New Yorkers when we officially open next month.”

Since launching May 1, NYC Ferry has proven so popular that the city and Hornblower, the ferry’s operator, have chartered additional vessels and ordered larger boats for its fleet to cut down on lines and wait times. A recent survey by the New York Economic Development Corporation of over 1,300 riders found that 93 percent of customers gave the service a satisfaction rating of seven or higher on a 10-point scale, with 66 percent giving the highest possible score.

“NYC Ferry is off to an amazing start, serving more than 1.5 million rider in less than four months,” NYCEDC President and CEO James Patchett said. “With today’s launch of the Astoria route, we’re expanding this great service to thousands of families in western Queens and Roosevelt Island. New Yorkers that have faced limited access to public transit will now have a fast, comfortable and affordable way to connect to good jobs and opportunities across the city.”