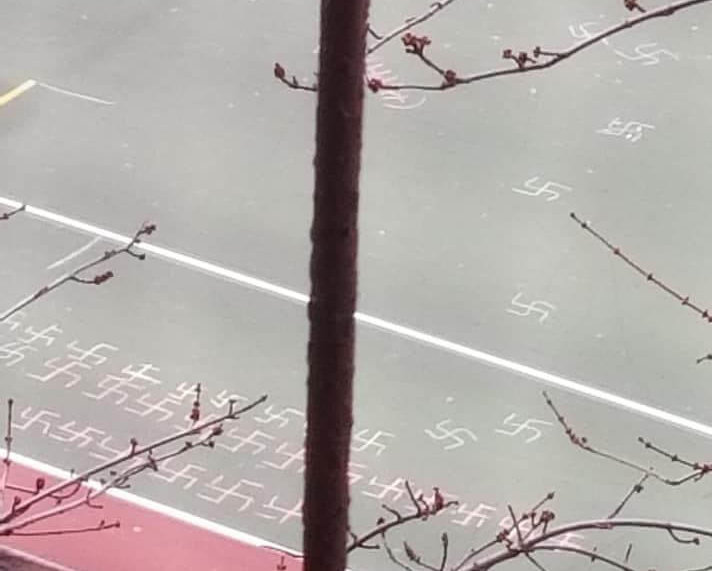 Police did not release the identity of the suspect due to his age. He faces a charge of aggravated harassment. After being arraigned, he was released into his mother’s custody, Chief of Detectives Dermot Shea tweeted.

“No matter the face of hate, the NYPD, partnered with the community, has ZERO tolerance,” Shea added.

Law enforcement sources said the boy wrote swastikas and anti-Semitic phrases across the schoolyard of P.S. 139, located at 93-06 63rd Drive, sometime on Feb. 22. School officials discovered the hateful imagery, written in chalk, and had them wiped out.

That same day, City Councilwoman Karen Koslowitz became aware of the incident and shared pictures of the damage on social media. Two days later, Governor Andrew Cuomo ordered the New York State Police to assist the NYPD in its hate crimes investigation into the incident.

Sources familiar with the investigation said only that “good police work” led detectives to the suspected vandal on Feb. 27. A motive for the boy’s actions remains unclear.

Koslowitz took to Facebook on Wednesday night to praise the NYPD’s efforts in cracking the case.

“The person who drew swastikas and anti-Semitic slurs in the P.S. 139 playground has been caught,” she wrote. “I am shocked that a 12-year-old committed this crime. It’s completely unacceptable and has no place in our society. Thank you to the 112th Precinct and the NYPD Hate Crimes Task Force for their swift action.”