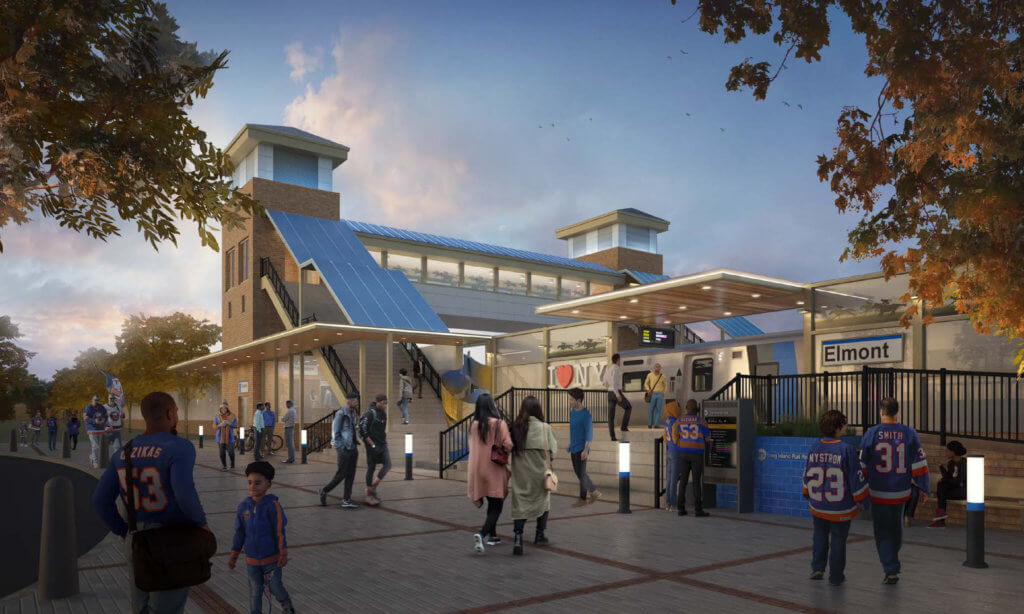 Rendering courtesy of the Governor's office

The $105 million station will be built between Queens Village and Bellerose stations on the LIRR’s main line just north of Belmont Park, and just east of the Cross Island Parkway, helping to mitigate traffic concerns raised by the planned 19,000-seat hockey arena that will be home to the New York Islanders.

“The Belmont project will help drive the region’s economy forward while building the Islanders a state-of-the-art facility at home on Long Island, creating thousands of jobs and hundreds of millions of dollars in economic output along the way,” Cuomo said. “Now with the addition of the first full-time LIRR train station in almost 50 years, we will provide millions of visitors and fans as a fast and affordable way to get there and continue New York’s nation-leading investments in 21st-century transportation infrastructure.”

The new station will provide direct service to Belmont Park from both east and west as opposed to the LIRR spur, which can only provide westbound service. Currently, LIRR commuters from the east must go to Jamaica and backtrack to the park.

“My colleagues and I, working with local community leaders, pushed hard for the inclusion of a full-service LIRR station as a part of the Belmont Redevelopment Project because we understood that the long-term success of this plan depended on significant improvements to transportation access to Belmont Park and the Queens Village-Elmont area,” state Senator Leroy Comrie said. “This new station will not only be a boon to the redevelopment project, which will create 10,000 construction jobs and 3,200 permanent jobs, but also for commuters who are dealing with crowded conditions at the Queens Village and Bellerose stations and heavy traffic on the Cross Island Parkway.”

In addition to the hockey arena, the redevelopment project also includes a 250-room hotel and 350,000 square feet of retail space, restaurants and movie theater.

“The Belmont Redevelopment Project will turn unused state land into an economic engine for Long Island and Queens, creating jobs both in the construction of a new LIRR station, and the hotel and retail village that can service Belmont’s visitors,” Congressman Gregory Meeks said. “Today’s announcement shows New York’s commitment to investing in public transit.”

The developers of the proposed project, New York Area Partners, will cover $97 million, 92 percent of the total cost of the LIRR station, and the state will invest $8 million.

“Eastern Queens and the Elmont community has been in need of transportation alternatives for a very long time,” Assemblyman Clyde Vanel said. “Also, we are encouraged about the economic opportunities in the community.”

Cuomo also released the economic impact study of the redevelopment project, which says nearly $50 million in new public revenue will be generated each year while creating $725 million in annual economic activity and generating annual employees earnings of roughly $133 million.

“The Queens Chamber of Commerce fully supports this Belmont Redevelopment Project, especially as it relates to and benefits the many businesses in Queens County,” Queens Chamber of Commerce President and CEO Thomas J. Grech said. “Further, we look forward to working with local elected officials in implementing programs specifically designed to support businesses large and small in this area.”