People raised their own stop sign at dangerous LIC intersection 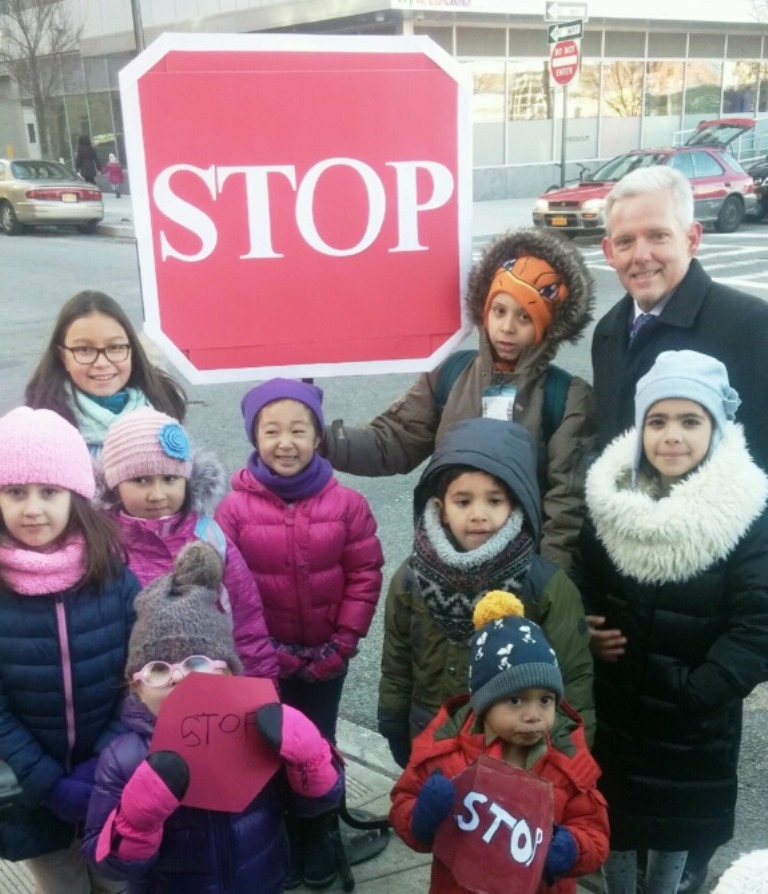 The city Department of Transportation (DOT) hasn’t put up a stop sign at one dangerous Long Island City intersection, so parents and students at P.S./I.S. 78 decided to do it for them.

The “people’s stop sign” was unveiled during a press conference that Councilman Jimmy Van Bramer and the P.S./I.S. 78 school community convened on Friday at the corner of 46th Avenue and Fifth Street.

Van Bramer said he has been trying for a stop sign at the intersection since 2012.

“Today we’ve taken matters into our own hands by installing the people’s stop sign. I hope the DOT hears our message loud and clear and commits to protecting our children before it’s too late,” Van Bramer said in a statement.

Children and families are a constant presence at the intersection. Beyond the 600 students that attend P.S./I.S. 78, there are also dozens of families who frequent the NY Kids Club, a preschool located across the street. Speeding taxis and trucks along 46th Avenue toward Center Boulevard are a common sight, endangering seniors and children, according to residents.

“This has been a concern for many people in this community, and we should take care of the situation now before something really bad happens,” said Jen Theien, president of the Gantry Parents Association. “This is a scary intersection and there’s absolutely no reason why there shouldn’t be a stop sign.”

Van Bramer’s initial May 2012 request for a four-way stop sign was denied by the DOT as the intersection did not meet the criteria for a stop sign. Van Bramer requested a stop sign again in 2013 and 2014. Van Bramer and Long island City residents feel the DOT has not done all in its power to keep transportation infrastructure up to date with the Queens neighborhood’s expanding population.

“DOT has studied this location for additional stop controls several times in recent years in response to community requests,” a spokesperson for the DOT said. “The location does not meet the criteria for an all-way stop. DOT is, however, already in the process of looking into other enhancements in this area.”