The cyclone that transformed Woodhaven: Our Neighborhood, The Way it Was

By Woodhaven Cultural and Historical Society Posted on July 15, 2017 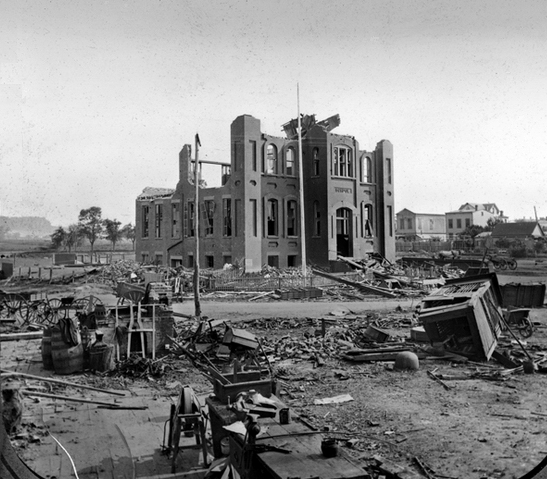 It was 122 years ago this month, July 13, 1895, that the storm appeared with no warning, first striking Woodhaven at Jamaica Avenue and Elderts Lane. The storm cloud, which was estimated to cover an area of 300 square yards, moved swiftly south injuring residents who were being battered by a massive amount of debris that was flying through the air.

Eyewitnesses described the cloud as massive and dark, and some said it was shaped like a funnel. Many others described a soft red glow within the cloud. They said that trees and chimneys were ripped from their foundations and flew through the air as if they were no heavier than feathers. Several persons found themselves lifted off their feet and carried through the air, landing a block or two away.

The worst scene of destruction was at the newly built 2-story brick schoolhouse at University Place (95th Avenue) and Rockaway Road (today, a Boulevard). P.S. 59 had been built in 1890 on land purchased from manufacturer Florian Grosjean, whose legendary factory and clocktower still stands on the border of Woodhaven and Ozone Park.

The roof of the schoolhouse was ripped off and the upper-half of the building collapsed. Only that this storm struck on a Saturday in July prevented this from being a far more tragic tale. No one was injured inside the collapsed school building. Outside, however, was a different story.

One block east of the school, at 3rd Avenue (84th Street) and Rockaway Boulevard, 16-year old newlywed Louise Petroquien, was at her sewing machine when she heard the commotion outside. Looking out the window, she saw the massive dark cloud overhead and ran outside to warn her mother.

She emerged from a side doorway but before she could shout out a warning, a large beam torn from the roof of PS 59 slammed into her head and neck, killing her instantly. It was her mother, returning after the storm had passed, who found her daughter’s body next to the steps leading to their home.

The storm moved south and out towards Jamaica Bay, leaving an eerie silence amidst the massive amount of destruction in its wake. Although there were close to 150 home damaged, accounts vary on how many homes were completely destroyed, and the number is probably somewhere between 15 and 30.

In the days following the storm, over 100,000 people came to Woodhaven via the Long Island Railroad on Atlantic Avenue to view the damage. While locals bustled about, clearing away debris, visitors dropped coins and bills into barrels set up for the close to three hundred people who lost everything, or nearly everything, to the storm.

For the next century, stories looking back on the storm of 1895 have referred to Louise Petroquien as the sole fatality from Woodhaven. However, one small victim of that storm has been consistently forgotten over the past century – 5-year old Johnny Kolb.

The boy had been playing on Atlantic and Rockaway when the storm hit and afterwards he was discovered lying under the rubble. The boy had broken both an arm and a leg and passed away the next day. Both Louise Petroquien and Johnny Kolb would be buried in Cypress Hills Cemetery.

Today, the intersection of 83rd Street and Rockaway Boulevard is now part of Ozone Park. There is nothing to indicate that this was once the scene of a powerful and destructive storm. An office building stands where the school once sat; for many years, this building was well known as a Friendly Frost appliance store. What happened there over 120 years ago serves as a reminder that we are forever at the mercy of nature and its tendency to humble us without warning.