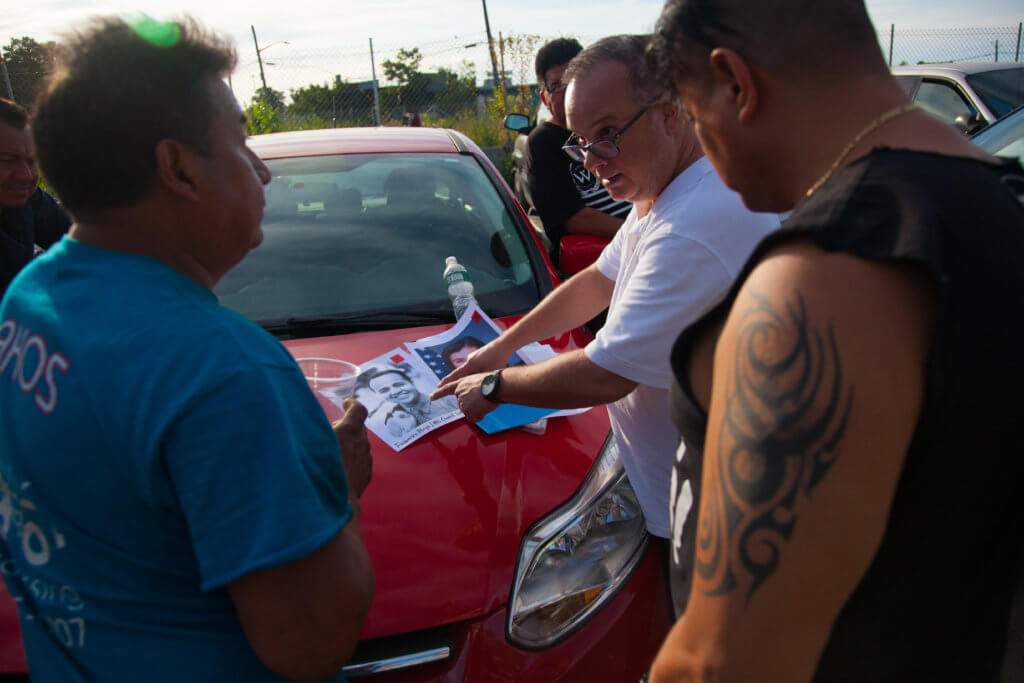 Rodrigo Sinchi was lured to move his auto shop out of Willets Point by city-subsidized economic incentives in 2015. Then he was evicted from the city-guaranteed new location in the Bronx in 2017.

After he conceded about $20,000 of lost income, gave up on managing his own shop, and went back to the Iron Triangle to find a gig just to get by, the city barred traffic from his new place of work by gating off Willets Point Boulevard as phase one of its adjacent megadevelopment.

After over five years of struggle, Sinchi is trying to reconvene the Sunrise Cooperative, a group of 45 mechanics and auto-body shops in Willets Point, who negotiated with the city for subsidies in 2014 after it took over their properties in order to develop Willets Point.

“We are the survivors,” said Sinchi.

Sinchi’s new goal is putting pressure on the city to open several streets, which functioned as access points for a large section of chop shops in the Iron Triangle. Sinchi gathered a group of five auto shop owners on Saturday, Sept. 1, to discuss their strategy for reopening a stretch of Willets Point Boulevard and several other adjoining streets that he says are choking off their flow of customers and cutting into their bottom line.

In early July, the New York City Department of Housing and Preservation blocked off Willets Point Boulevard, 36th, 37th and 38th avenues as part of its overarching Willets Point Development Plan. On Saturday, the shop owners met with Robert LoScalzo, an advocate and documentary filmmaker who has been reporting on the plight of the Iron Triangle shop owners for years.

“The travesty here runs so deep and long. It’s hard to even summarize it in a few sentences,” LoScalzo said.

Spencer Flores said he lost $45,000 in moving to Willets Point from the failed Bronx warehouse.

“Well now, OK I’m fine. And then they close the city gate,” said Flores. “Customers don’t come every day. They come one time a week or maybe every other day.”

LoScalzo gave the group advice on which politicians to target and how to get the attention of local civic organizations. The group agreed that they would show up to the next Community Board 7 committee meeting on the Willets Point Redevelopment on Sep. 18 and contact state Senator Jessica Ramos and Councilman Francisco Moya to advocate on their behalf.

This plan to gather political support is not without its skeptics though. Another Iron Triangle shop owner Irene Prestigiacomo said that she and other allied shop owners have been reaching out to the offices of Ramos and Moya since May in order to enlist their support for paving the roads, without being able to get them to agree to a meeting.

Prestigiacomo was not at the meeting on Saturday, but she said has also begun to push for the reopening of 36th Avenue and Willets Point Boulevard streets to make the auto body businesses more accessible.

Moya’s spokesperson said that the office had never heard from an individual named, but that it is aware and sympathetic to the predicament of the workers of the Sunshine Cooperative.

“As everyone knows, the roads in Willets Point have been an embarrassment and a hazard for years,” wrote the spokesperson. “Last spring, the Council member took the Department of Transportation on a walkthrough of Willets Point to identify areas in desperate need of resurfacing and spoke with local business owners about road conditions. Our office is continually looking into how to improve the area for the local shop owners and always open to suggestions.”

A spokesperson from Ramos’ office said that it recently replaced its scheduler after they found a number of instances where constituents contact requests had been ignored. The spokesperson added that Ramos plans to schedule a meeting with the workers and city stakeholders by November at the latest.