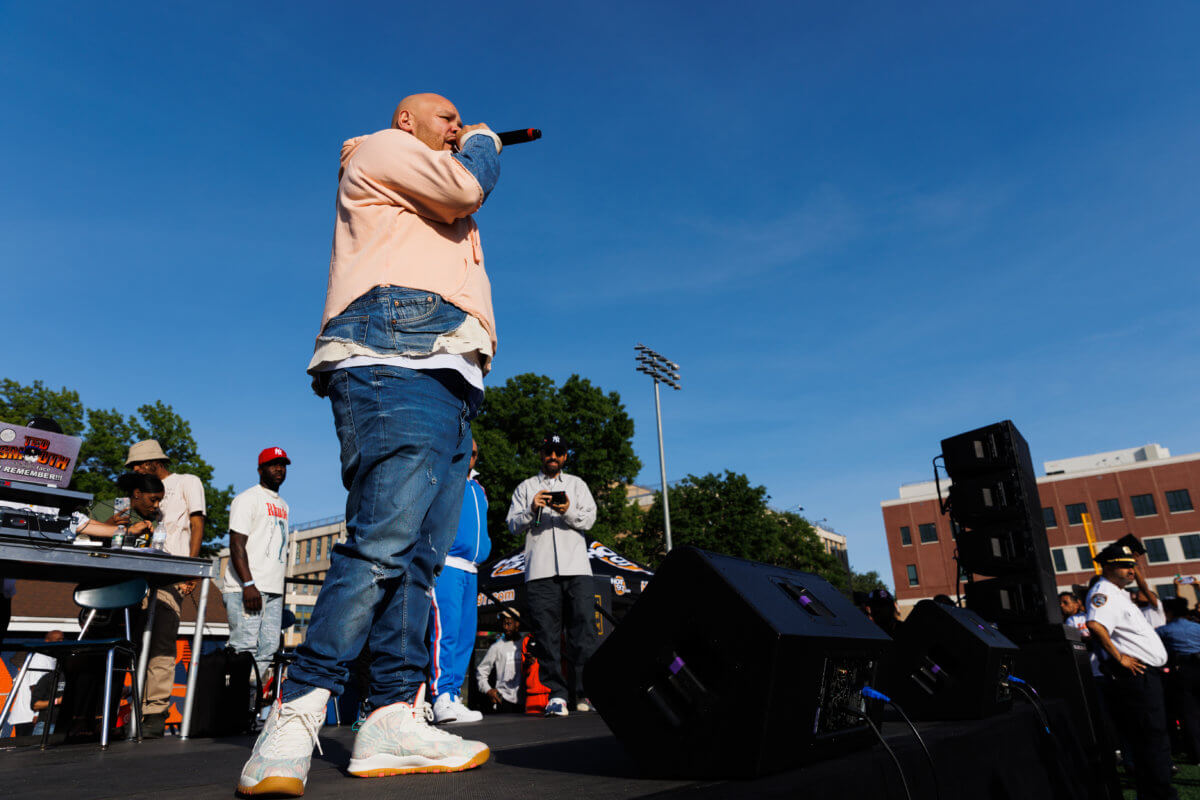 Students from Benjamin N. Cardozo High School gathered on the football field to celebrate the school’s Branded Arts Festival on May 25.

While more than 10 renowned urban artists were working on creating murals on the school’s walls, several students put on performances, including music, dance and poetry. Additionally, an art gallery of students’ works was open for viewing.

Additionally, Hot97 FM was giving away tickets to Summer Jam to lucky students. Fat Joe ended up performing on stage for the students.

Fieg got his start working for his uncle’s footwear chain, David Z, moving up in the ranks from a stock boy and salesman to manager and head buyer. He eventually began bringing in many of the athletic footwear brands for the chain of stores, including Asics, which offered him the chance to collaborate on new designs based on their existing shoe models.

He designed three pairs of Gel Lyte IIIs called “The 252 Pack,” due to each sneaker being produced in quantities of 252. Fieg’s new sneaker designs ended up on the cover of The Wall Street Journal and sold out in 24 hours, helping to launch his new career path. Fieg opened up his own apparel and footwear boutique, Kith NYC, on Nov. 11, 2011.

“I was fortunate enough where I knew what I wanted to do from a certain age,” Fieg said. “But it’s never too late to discover your passion. It’s important to put the work in and feel accomplished in life. You can’t get from A to Z without the alphabet.”

According to Brand, this marked the third Branded Arts Festival since the project’s beginning six years ago. He also said this was the first one in New York City that they’ve done. The murals at Cardozo High School were initially supposed to be installed in 2021, but the pandemic resulted in it being delayed an extra year. Additionally, he noted that these kids could certainly use an event like this in the wake of the school shooting in Texas.

“I have a deep love for art and want to share it with kids in hopes of inspiring them just as it has for me,” Brand said. “It’s not just about the murals; it’s a full-on immersive experience. It’s important to immerse students in an artful environment, as intelligence in art permeates thinking and grants the students a creative outlet that could really end up helping them.”

The Branded Arts Festival will continue on Thursday, May 26, and Friday, May 27, with multiple TED Talks and symposiums scheduled. Zahra Sherzad, the founder of Noorvision LLC, an NYC-based independent production company, discussed her career in the international art community Thursday morning, putting a specific focus on women in Street Art. She then showed a six-minute short film that she co-produced titled “Magrela // Sao Paulo // Brazil.” She later took questions from the audience after the film.

The CityKids Foundation will be holding workshops at 11:15 a.m. and noon. Thursday, where students will engage in conversation using the framework of restorative justice practices before collaborating on a visual art project. This provides students the opportunity to learn how to explore issues together in a space and respectful environment and discover ways to amplify their voices through the arts.

On Friday at 10:30 a.m., the CityKids Foundation will hold an informative exploration of the cryptocurrency economy and discover opportunities for young activists to use Web3 to create non-fungible tokens (NFTs) and participate in decentralized autonomous organizations (DAOs) for social change and financial independence.

At 11:15 a.m., Antquan Washington, a leading construction sales rep for the third largest company in the United States, Herc Rentals, will tell his personal story and discuss opportunities within the organization. He will also discuss the ongoing partnership with Branded Arts to enrich schools around the country by participating in large-scale mural projects and installations.

At 12:45 p.m., Erik Blamoville II, the creative director for the legendary hip-hop band Run-DMC, will discuss mental health awareness and his passion for music, fashion and art. He’ll also discuss how he’s attempted to give and teach the youth all of the nuisances of life not often received in traditional schooling. Additionally, at 1:30 p.m., Run-DMC member Darryl McDaniels will discuss similar topics before answering questions from those in attendance.