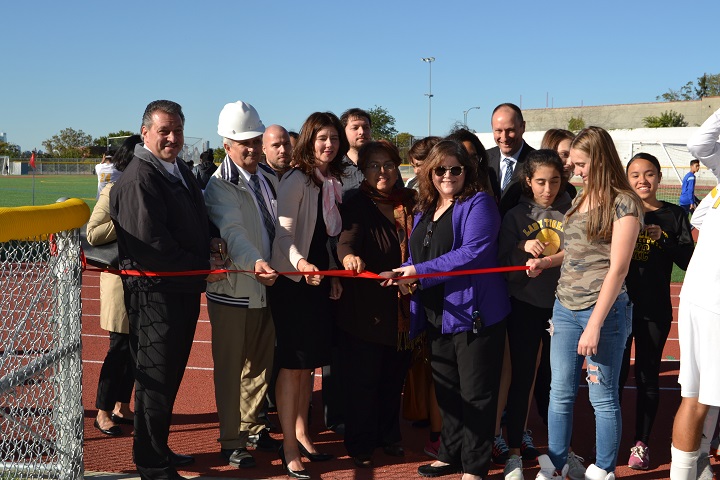 The student athletes at Grover Cleveland High School (GCHS) had plenty of reasons to celebrate on Friday, Oct. 14, as their school officially unveiled the brand-new, $8.5 million athletic field at Seneca and DeKalb avenues in Ridgewood.

The new athletic field has a full-size, AstroTurf soccer pitch with playing lines for boys and girls lacrosse, regulation-sized softball and baseball fields, a multi-lane track around the perimeter, a state-of-the-art batting cage, and two handball courts and four tennis courts — which were already at the previous field.

“We wanted an all-purpose athletic field because space is limited in New York City, but it’s also limited for us, and we have 28 teams,” Vittor said. “We wanted a space where everyone could play, and different sports and seasons would be accommodated.”

In February, the school broke ground on the new athletic filed. Only eight months later, it can be hard to believe that the project is complete, with a fully functioning electronic scoreboard and a beautiful view of the Manhattan skyline.

The school wasted no time breaking in their new field, as the GCHS soccer team had the field’s very first official match immediately following the ribbon-cutting ceremony.

“We’ve been waiting four long years to get out here and play on this field again,” said Mike Irizarry, coach of the GCHS soccer team. “[The players] are just as excited as I am. We have five more games this season and we found out that all five games will be played here, so I am looking for a very successful start.”