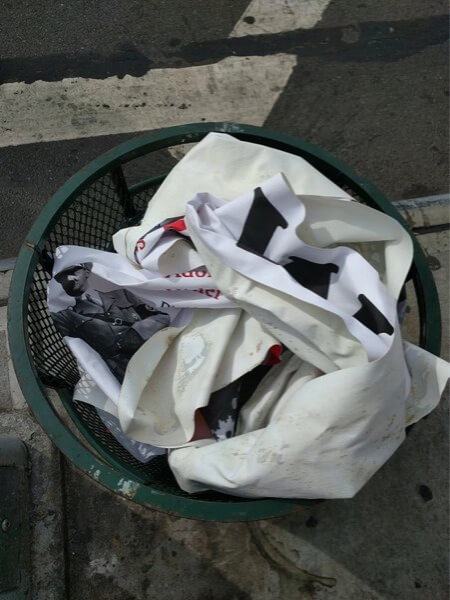 A sunnyside resident is raising money in anticipation of legal fees after ripping down Nazi imagery placed n the lobby of a building by the landlord.
GoFundMe

After months of talk about property manager Neal Milano’s decision to festoon the lobby of a Sunnyside building at 47-55 39th Pl. with Nazi and Confederate imagery, Jeff Orlick of Jackson Heights bit the bullet and ripped the decorations down.

Now, a year after owning up to trespassing and petty larceny charges on a GoFundMe page for the purpose of raising money for legal fees, Orlick said he went with a court- appointed lawyer after all and will be donating the nearly $2,000 collected to the Hebrew Academy for Special Children.

“I am all for free expression, more than anyone. Especially as a Jew, for everyone to be able to express themselves is paramount for guaranteeing our own freedoms around the world,” Orlick wrote on the GoFundMe page. “On the other hand, this man was being an incredible jerk by harassing the residents who were powerless to defend themselves from him. Powerless because he is the sole person in charge of the building, levying fines against the residents, and making their lives hell.”

But in an update to the page posted on Aug. 2, Orlick said his court-appointed lawyer provided good representation and took an adjournment in contemplation of dismissal for the crime he was “unapologetically guilty” of.

“I figured that my position as a neutral player would free me from any harassment by him,” Orlick added in the original post. “Also, after being bullied when I was younger and afraid to do anything because of possible repurcussions [sic] with detention and physical harm, I am no longer afraid and feel I should defend people and myself from harassment at any opportunity. I did this without hiding my identity because I have no shame for my actions — I only wish that it was done sooner. And so, on August 28th, after conferring with a resident of the building, I went there and took it down… At 6:30 a.m. on January 2nd, 2018, I was arrested for it.”

City Councilman Jimmy Van Bramer (D-Sunnyside) first drew attention to the imagery placed by Milano, 70, in August 2017 and highlighted the fact the former property manager even put the names Josef Mengele and Rudolph Hess in the building’s directory.

After the city’s Commission on Human Rights investigated Milano, the property manager resigned from his post in February.

“This kind of behavior is disgusting and unacceptable. People were terrified,” Van Bramer said after Milano’s resignation. “As soon as we saw what was happening, we alerted the commission, who acted swiftly. No person in New York City should feel threatened or be harassed and discriminated against based on where they were born, how they pray, or who they love — especially in their own homes. I am happy to see this resolved and to know that the residents will no longer have to live in fear, and can feel safe in our own community.”

Orlick said the only real price he paid for tearing the imagery off the walls and leaving it in a trash receptacle on the street was the time he lost at work to be in court.

The $1,946 raised from the GoFundMe page will still go to the Hebrew Academy for Special Children, Orlick said.